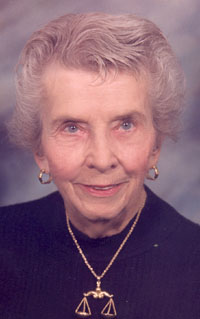 Virginia Morgan, 90, passed on peacefully in Pueblo, CO, on Saturday, September 30, 2006. She was just a few weeks away from her 91st birthday. Her family is picturing her greeted by those who have predeceased her: her daughter and son-in-law, Mary and George Strong of Gross Pointe, MI; her first husband, Gilmore Van Hamm, who died when their five children ranged from eleven to almost one year old; her second husband, Joseph Morgan, of Poland, OH, where they spent many delightful years together; her parents, Edwin and Madeline Droste Krieghoff of Grosse Pointe, MI, who welcomed Jinny and her children into her home after Gil died; her brother, Ned Krieghoff; and two sisters, Madeline Hikes and Ellen Bird and their spouses; and many other friends and relatives. Jinny Morgan earned a Bachelor of Arts from the University of Michigan and later a Masters in Education. She became a teacher, and after Gil died resumed her career in the Detroit Public Schools, where she eventually retired as an administrator. Jinny is gratefully remembered by her surviving children and their families: Judeth Van Hamm and her partner, Michael Connelly of Hull, MA, and Judeth's sons, Brook and Blake Wiers; Ned and Julie Van Hamm, of Golden Valley, MN, and their children, Shawn, Shannon, and Timothy; Krista deJonckheere and her husband, Tom of Palmer Lake, CO, and their sons, Eric and David; Krista's twin, K.C. Savage and her husband, Joe Arrigo of Pueblo, CO and Santa Fe, NM and K.C.'s children and their families, Tige and his wife, Elizabeth Savage of Arlington, VA, and their children, Jack, Nicholas, and Molly and Christie Olsen and her husband, John of Alexandria, VA, and their children, Alexandra and Gatsby; and the children of Mary and George Strong: Lara Ahmen and her husband, Simo of Rio Rancho, NM, and their son, Ryan, and Charlie Strong of Alexandria, VA. She is also especially remembered by Joe's mother, Becky Arrigo of Pueblo, CO; her dear friend, Cheryl Chavez of Colorado Springs, Colo.; and her childhood friend, Clif Goddin of Tulsa, OK. She is fondly remembered by her stepchildren and many nieces and nephews. Jinny's children appreciate being well educated at Sacred Heart and Jesuit schools and the University of Michigan and other colleges, travels together, the sweaters she knit, the Christmas stockings she made, and the family stories she told. She raised a family where love is the most important thing. There will be no viewing. Cremation, Montgomery & Steward Crematorium. Memorial service will be held 10 a.m. Saturday, Oct. 7, 2006, in the Montgomery & Steward Chapel. In lieu of flowers, remembrance donations may be sent to the Mary Van Hamm and George Joseph Strong III Scholarship at the University of Michigan, Ross School of Business, 701 Tappan Street, Room W3700, Ann Arbor, MI 48109-1234, Attention: Terri Parks. Online condolences, www.montgomerysteward.com