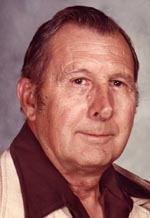 Thurman A. Pullum, 84, of Pueblo, Colorado, completed his transition from this life on December 13, 2003. Survived by his wife, Margaret; daughters, Beverly (Robert) Barton of Colorado Springs and Regina Nadeau of Lake Forrest, Calif.; step-daughters, Gloria (Dick) Simms of Pueblo and Darlene Vasquez of Salt Lake City; grandchildren, Debra (Jeff) Dufour of Yucca Valley, Calif. and Brian Nadeau of Tuston, Calif.; 3 great-grandchildren; niece, Mindy Montoya and great-nephew, Aaron Montoya both of West Covina, Calif. Preceded in death by his brother, Clarence Pullum; sisters, Kathryn Woodworth and Theola Davies. Thurman was born to Herman and Lenna Pullum on October 28, 1919, in Lewis, Indiana. He served in the U.S. Navy during WWII and retired as a cost clerk at CF&I in 1976 after 30 years of service. As per his request, there will be no viewing. Funeral service will be held 1 p.m. Wednesday, December 17, 2003, in the Montgomery & Steward Chapel with the Reverend Earlene Cornell officiating. Interment will follow at Roselawn Cemetery. Those who desire may make memorials to American Stroke Foundation.