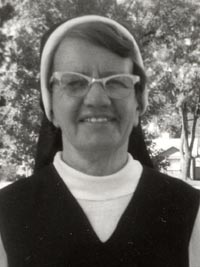 Sister Mary Clare Peterson, 86, went to the Lord on the Feast of the Assumption on August 15, 2004. She was laid to rest in the church cemetery in San Luis, Colorado, on August 19th. In January 1942, she entered the convent of Mt. St. Scholastica. She taught school in Kansas, Nebraska and Missouri. In 1958, she came to Colorado. She was a charter member of Benet Hill. For many years she was the organist at the Shrine of St. Therese. In 1994, she retired and lived with her sister, Sister Mary Hugh. A memorial Mass will be said at 10 a.m. Thursday, August 26, 2004, at Shrine of St. Therese, 300 Goodnight. Father Liam Courtney will be the celebrant. Online condolences, www.montgomerysteward.com