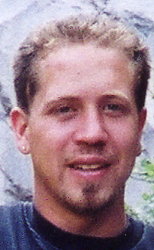 The Real McCoy,' Samuel McKinzie McCoy, 25, completed his life early and rejoined his Heavenly Father at approximately 3:20 a.m. on Dec. 31, 2004. Although Sam's life was short lived, it was filled with so much meaning and joy. Sam proved himself an outstanding athlete early in life by playing various sports. He obtained a third degree Red Belt in Karate at age 11. In 1998, he graduated from Manti High School in Utah. During high school Sam acquired three letters each for wrestling and baseball as well as four letters for his outstanding accomplishments in football. Family and friends will always remember Sam as 'Our Lucky Number 7.' He was named in the Who's Who book of high school athletes in 1998. Sam was born April 20, 1979, in Provo, Utah and moved to Pueblo, Colo. in the summer of 1998 to pursue his dream of playing college baseball. These plans were postponed due to a severe motorcycle accident resulting in a closed head injury. He had a very strong will to survive and battled back from all his obstacles and began working in a partnership in his family's locally owned business, AAA Shamrock Lawn and Landscaping. Sam married Heather (Kanmore) McCoy in 2002 and began their journey together through life. Sam loved life and his family, Heather and son, Christopher, deeply. His hobbies included shooting skeet or 'keeping it in the loop' with his late grandfather, James B. McCoy. He absolutely loved restoring old vintage cars with his father, Elbert 'Ebb' McCoy and younger brother, Gregory McCoy. But most of all he loved his family and enjoyed spending his pastime playing and interacting with his son. Sam was attending Pueblo Community College, majoring in auto body repair and custom painting. He was interning and working part-time at Champlain's Auto Service and Custom Painting. Sam loved his new career and new found friends associated with his internship and work. Sam is preceded in death by grandparents, James B. McCoy, Virginia Strickler McCoy, Edwin 'Ted' and Florice Hjorth Thomas and his favorite uncle, Martin McCoy. Sam is survived by his wife, Heather M. McCoy; son, Christopher; mother and father, Natalie McCoy and Elbert 'Ebb' McCoy; sister, Harmonie S. (Cody) Strickland; brother, Gregory 'Gregster' McCoy; extended family, Tim 'Dad' and Sheila 'Mom' Jahn; sisters, Amber, Kristen and Janelle Jahn; special grandparents, Robert and Irene Lamb; and dearest friends, Tim Schafer, Jason Graves, Rick Schafer and Lenny Carpenter; along with other numerous family members, friends and neighbors. Sam has touched many of our lives with the warmth of his smile and outgoing personality. The phrase 'What's crackin'!' will be forever etched within our hearts. All who knew him truly understand just how genuine of a person Sam was. Sam will be greatly missed by many! Viewing at the funeral home today from 10 a.m. until 6 p.m. and Tuesday prior to service time. His funeral service will be held 2 p.m. Tuesday, Jan. 4, 2005, at the Montgomery & Steward Chapel with Bishop Tony Roberts officiating. Interment will follow at Imperial Memorial Gardens. In lieu of food and flowers, memorials may be made to his son, Christopher's Education Fund, in care of Montgomery & Steward Funeral Directors, 1317 N. Main St., Pueblo, CO 81003. Online condolences, www.montgomerysteward.com