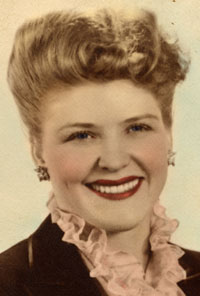 Roberta Marie Russell, 85, passed away April 11, 2004, in Pueblo, Colorado. She was born to Sylvia Leota and Martin Edward Davis on Dec. 19, 1918, in Kellerton, Iowa. She also resided in Fort Lauderdale, Florida for 17 years where she worked as a secretary. She moved to Pueblo in 1993, where she has resided since that time. Roberta was united in marriage to Marvin A. Rusell, who preceded her in death. From this union was born two sons, Charles B. (Ann) Russell of Fort Lauderdale, Florida and Martin A. (Lynda) Russell of Hartford City, Indiana. Mrs. Russell is also survived by two sisters, Alice (Harold) Peck of Corydon, Iowa and Charlotte (Roy Coffman) Overton of Pueblo West, Colorado. Also left to mourn her passing are two grandchildren; eight nieces; eleven nephews; and special great nieces, Kristy, Kim and Tracey Knutson of Pueblo West. Roberta was a member of First Southern Baptist Church in Pueblo. As per her request, there will be no viewing. Cremation, Montgomery & Steward Crematorium. Memorial service will be held 2:30 p.m. Thursday, April 15, 2004, in the Montgomery & Steward Chapel with the Reverend Bob Swift officiating. Interment, at a future date, will be held at Leon Cemetery in Leon, Iowa.