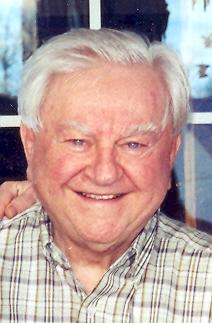 Robert M. 'Bob' Adams was born on August 18, 1924, in Reading, Pa. He was the only child of Emma Ruth Adams DuHadway. He died on June 21, 2007, in Pueblo, Colo., at the age of 82. Bob was a graduate of The George Washington University in Washington, D.C., where he received a B.A. in Political Science. He served in the U.S. Army Air Force for three years during the Second World War. Bob is survived by his wife, Suzanne Adams, a native of Fort Atkinson, Wisconsin, whom he married in 1984 and by five children from his former marriage to Anne Meagher Adams of Mankato, Minnesota. They are Stephen M. (Shelley) Adams, Abigail (Irwin) Rosenblum, Kelly C. Adams, Katherine Anne (David Aberdeen) Adams and Susan E. (Arthur) Peet. He is also survived by 13 grandchildren; and two great-grandchildren. Bob worked in television and radio for 39 years before retiring in 1987. Beginning his career in Washington, D.C. he worked in the promotion departments of WRC-TV and WTOP-TV and earned an Emmy Award for serving as the President of the local chapter of the National Academy of Television Arts and Sciences and as an honorary Vice President of the national organization. During the late sixties, he worked at WNBC Radio in New York City. The latter part of his career was focused on sales and marketing for Public Television with positions at WQED-TV in Pittsburgh and at KTSC-TV in Pueblo. He was an active member of the Pueblo Charter Lions Club where he was president in 1993 and 1994, received the 1995-1996 Lion of the Year Award, the Melvin Jones Fellow Award in 2000, held numerous club offices and coordinated the travelog programs. Special thanks to his primary doctor of many years, Dr. Larry Walls, and the very caring staff, nurses and doctors at the emergency room, the ICU and 3 Southwest at Parkview Medical Center, as well as the Sangre de Cristo Hospice House. There will be no viewing. Cremation, Montgomery & Steward Crematorium. Memorial service, 11 a.m. Monday, June 25, 2007, in the Montgomery & Steward Chapel. In lieu of flowers, memorials may be made to Henry G. Robinson Sight Conservation Fund of Pueblo Charter Lions Club, Rocky Mountain P.B.S. or Sangre de Cristo Hospice through Montgomery & Steward Funeral Directors, 1317 N. Main St., Pueblo, Colo. 81003. Online condolences, www.montgomerysteward.com