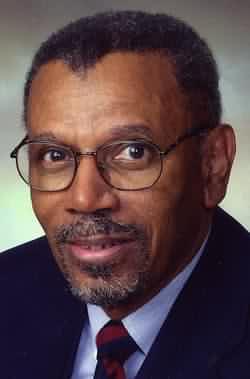 Robert Lee Hawkins, 64, born on February 18, 1938, and passed away on July 12,2002. Deeply committed to quality mental health care, social justice, and optimum educational opportunities, he dedicated his life to making his community, state and world more welcoming and functional for all. He recently retired as Superintendent from the Colorado Mental Health Institute after 46 years of service. His father, Isom Hawkins, and his mother, Bessie Mae Huguley, preceded him in death. He is mourned by his wife, Sharon; by his children, of whom he was incredibly proud, Robert Lee (Anita) Hawkins, Jr., Jeanne Marie (Elvin) Caldwell, Julia Renee Shazier, and Rose Ann Hawkins; by his grandchildren, Derrick Hawkins, Tavonne Shazier, and Spencer Hawkins; by his brother, Sylvester (Janie) Owens; by numerous nieces and nephews; and by many dear and valued friends. He was an elected member of the Civil Service Commission for 29 years, Vice-chair of the Pueblo Democratic Party for 24 years, and served six years on the U.S. Department of Education National Advisory Committee on Institutional Quality and Integrity. Currently, he also served on the boards of the National Girl Scouts, Pueblo Housing Authority, Neighborhood Housing, Pueblo Diversified Industries, Crime Stoppers, YMCA Capital Campaign, Spanish Peaks Mental Health Center, Sycare, Red Cross, Community Corrections Screening Board, University of Denver School of Social Work Advisory Committee. In addition to the above and serving on many other boards, commissions, and committees, he had previously held chairmanships on the Colorado Commission of Higher Education, Pueblo NAACP, Sangre de Cristo Arts and Conference Center, United Way, Pueblo War on Poverty, Crime Stoppers, Broadway Theater League, Southern Colorado Chapter of National Association of Social Workers, and Pueblo Community Action Committee. He also served in the United States Army for 4 years, receiving an honorable discharge. He enjoyed people and working with others, a good laugh, good music, traveling, and every opportunity that came his way. He cherished his wife and family and loved his community. He will be sorely missed. At his request there will be no viewing. An ecumenical service in his memory will be held 2 p.m. Tuesday, July 16, 2002, at Praise Assembly of God Church, 2000 Troy Avenue, with the Reverend Rodney Perry and Reverend Dr. John Ross officiating. Private interment will be held at Mountain View Cemetery. Those who wish to honor his memory, may want to consider donations to Colorado Mental Health Institute at Pueblo or to Buell Children's Museum at Sangre de Cristo Arts and Conference Center, c/o the funeral home.