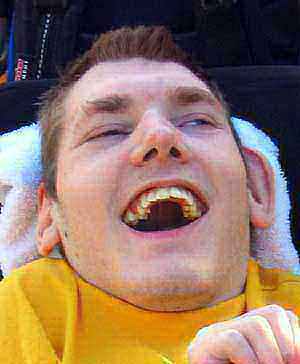 Richard Alan Brooks, 23, passed away Aug. 13, 2008. Survived by his mother, FeAna (Dave) Balsick of Pueblo; father, Larry (Lenora) Brooks of Centennial, Colo.; sisters, Laura Kaye Brooks of Denver and Krista Balsick of Pueblo; grandparents, Gladys and Roland Brooks of Pueblo and Helenrose and Clem Burke of New Mexico; aunts and uncles, Suzanne and Tim Burke of Littleton, Colo., Mark Balsick, Kibbie Balsick and Debbie Balsick, all of Pueblo; and numerous cousins. Preceded in death by his uncle, Michael Burke. Richard was born June 19, 1985, in Grand Junction, Colo. He graduated from Pueblo East High School in 2006. Since graduation, he attended BAAS, through Colorado Bluesky daily. He touched the lives of so many people in a positive way. He taught people that different is okay and was such an example of unconditional love. Special thanks to Jodi Saro and the staff at the Grand Junction Regional Center; Jim and Joni Wolfe and the staff at CARE, Inc., who are Richard's exceptional extended family. Also, special thanks to BAAS, Colorado Bluesky, Inc. especially Bob Benvinuto. In addition the family wishes to express their thanks to Dr. Spencer Walker and staff, the staff at Parkview 2-south and the outstanding Frontier Hospice staff for their wonderful care of Richard. There will be no viewing. Cremation, Montgomery & Steward Crematorium. Memorial service, 1 p.m. Sunday, Sept. 14, 2008, in the Montgomery & Steward Chapel with Chaplain Rollie Gill officiating. Followed by lunch and a time for sharing in the Montgomery & Steward Banquet Hall. In lieu of food and flowers, memorials may be made to Frontier Hospice or CARE, through Montgomery & Steward Funeral Directors, 1317 N. Main St., Pueblo, Colo. 81003. Online condolences, MontgomerySteward.com