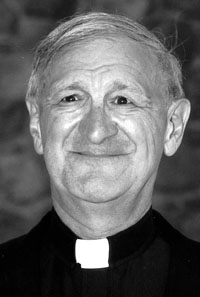 Reverend Father Joseph George Kukucka, 71, of Sugar City, Colorado, passed away October 10, 2004, in Pueblo, Colorado. Survived by his brother, Ronald Kukucka; and his sister, Theresa Mary English. Preceded in death by his parents, Joseph and Genevieve Kukucka. Born November 13, 1932, in New York. Father Kukucka was ordained a priest May 22, 1965, at Our Lady of Victory Basilica in Lackawanna, New York, for the Diocese of Pueblo. He served in numerous parishes in the Diocese of Pueblo including St. Peter, Gunnison, St. Mary, Walsenburg, and St. Patrick, Telluride. In 1969, he entered the U. S. Navy. After military service, he served as pastor at St. Rita, Mancos, co-pastor at La Junta Catholic Parish and chaplain at St. Joseph Hospital, Florence. He also served at the Cathedral of the Sacred Heart, Our Lady of Assumption and St. Francis in Pueblo, as well as St. Peter, Ordway. He will lie in state from 2 p.m. until 7 p.m. Thursday at the Cathedral of the Sacred Heart. Vesper service, 7 p.m. Thursday, October 14, 2004, with the Very Reverend Roger Dorcy presiding and Funeral Mass, 10 a.m. Friday, October 15, 2004, with Monsignor Mark Plewka as celebrant. Both services will be held at the Cathedral of the Sacred Heart, 11th and Grand, Pueblo. Military honors by Pueblo Veterans Ritual Team and interment will follow at Roselawn Cemetery. Those who desire may make memorials to the Diocese of Pueblo Foundation, in care of Montgomery & Steward Funeral Directors, 1317 N. Main, Pueblo, CO 81003. Online condolences, www.montgomerysteward.com