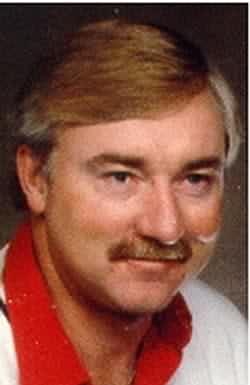 Raymond L. Fisher, Jr., 47, passed away Nov. 16, 2000. Survived by his loving wife, Chris; daughter Hannah; mother Jeanne Fisher; sisters, Janene Davis and Jan Jones, all of Pueblo. Also survived by his brother in spirit, Jim LiVecchi and Jim's family, Jody, Jena and Jade LiVecchi, all of Salida; special friend, Bob Sibert; and numerous nieces and nephews. Preceded in death by his son, Shayne on September 29, 1990 and father, Raymond, Sr. on March 9, 1999. He graduated from Centennial High School in 1971, where is he was an outstanding athlete in basketball and baseball. After working for the Burlington Northern Railroad as a conductor, Ray became a golf professional in Sheridan, Wyo., and later in Douglas, Wyo. Ray had been the assistant general manager of Wilcoxson's auto dealership for the past 5 years. An avid baseball card collector, Ray also was a dedicated sports fan and a sentimental poet. He was quick to tell a joke or a quip, and had an outstanding sense of humor. He always went that one extra step to make sure his customers and his family were cared for. He loved his family and was especially proud of Hannah. He will be deeply missed by his many friends and family members. Ray was a member of the Masonic Lodge. He will lie in state from 2:00 until 6:00 p.m. today at the Montgomery & Steward Chapel with the family receiving friends from 2:00 until 4:00 p.m. Services will be held at 2:00 p.m. Monday at First Baptist Church, 405 West 9th Street, with the Reverend Wayne Dvirnak and Reverend James Harley, officiating. Interment will follow at Mountain View Cemetery. The family will receive friends at the church immediately following the interment. Memorial donations may be made in Ray's name to the Cystic Fibrosis Association through the funeral home office.