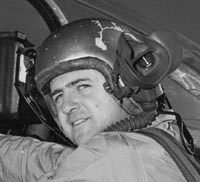 PHILIP W. HOUGHTON Philip passed away March 9, 2007 in Pueblo, Colorado. Survived by his wife of 55 years, Mary, children Donna and Philip Jr. His son Stephen preceded him in death. He was born in 1919 to Brigadier General J.H. and Hazel Houghton at Kelly Field in San Antonio, Texas. His father was a career military officer in the U.S. Air Force. Phil lived many places. He entered the Air Force in 1953 and became a P-51 fighter pilot serving our country in WWII on Okinawa and occupation of Japan. Leaving the Air Force he accepted the position of Assistant Aerodynamicist at McDonnell Aircraft in St. Louis, Missouri. He maintained Air Force Reserve status until becoming a test pilot, both production and experimental. He accepted the position of Chief Production Test Pilot in 1956. He and Mary raised their family in St. Louis County. As family man, he enjoyed spending time in his workshop, working on cars and exploring the American West, packing up the family for camping trips in the mountains. He instilled in his children a great love of the outdoors. In 1991, he and Mary retired to Pueblo West to be closer to the children, all in Colorado. Active his entire life, Phil enjoyed tennis, golfing, skiing, hiking and bicycling. Most of all, he loved flying. Cremation, Montgomery & Steward Crematorium. Memorial of your choice. A memorial for Phil is planned for the future in St. Louis. Inurnment at a later date. Online condolences, www.montgomerysteward.com