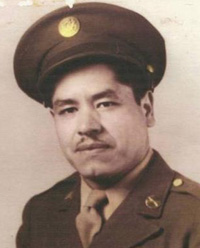 Pedro 'Pete' Jiménez, Chevalier de la Légion d'Honneur, Française (Knight in the Order of the Legion of Honor, France), 89, passed away after a lengthy illness on Sunday, March 5, 2006, in Pueblo, Colorado. Born in Vaughn, New Mexico on Feb. 2, 1917, Pete was a Pueblo resident for over 55 years. He is preceded in death by his parents, Jose and Valentina Ramirez-Jimenez; his brother T-5 Leon Jimenez, 4th Infantry Division, U.S. Army (Killed In Action at the Battle of the Bulge, World War II); his sister, Pauline Tabares; brother Nicholas Jimenez; and one daughter. He is survived by his wife of 58 years, Carmelita 'Carmen' Gonzalez-Jimenez; brother, Daniel (Esther) Jimenez; 6 children; 16 grandchildren; 10 great-grandchildren; numerous nieces and nephews; and many friends. Three members of Pete's family are currently serving in our armed forces, in the current war against terror; two nephews are serving in Iraq and Afghanistan, and one grandson-in-law is attending Medical School as a U.S. Naval Officer. Pete served with the 29th Infantry Division, U.S. Army, during World War II, and experienced some of the most vicious combat in military history. He was invested as a KNIGHT, in the Order of the Legion Of Honor, for 'Extraordinary Heroism and Valor' in battle, by the French Government, and was awarded the French Croix de Guerre (the French Medal of Honor), for 'Heroism, Gallantry, and Bravery', by French General Charles de Gaulle (personally approved by General of the Army, Dwight D. Eisenhower), in January, 1945. Some French citizens have referred to Pete Jimenez, as 'the Sgt. Alvin York, of World War II'. Others simply have stated that Pete Jimenez 'earned Knighthood the old fashion way - on the battlefield'. Pete was also awarded the Bronze Star, with 'V' device, and one Oak Leaf Cluster (two awards) for 'Valor and Heroism'; the Purple Heart, with four Oak Leaf Clusters (was wounded in battle on five separate occasions); the Good Conduct Medal; the European, African, Middle Eastern Campaign Medal, with one Bronze Arrowhead (for the Amphibious assault on Omaha Beach, during the D-Day / Normandy Invasion); and four Bronze Campaign Stars for 'combat in the Normandy, Northern France, Rhineland, and Central Europe (Germany) Campaigns; the WWII Victory Medal; the Combat Infantryman's Badge; the Expert Infantryman's Badge; the 'Expert' M-1 Marksmanship Badge; the 'Marksman', 1903 Rifle Badge; the 'Marksman' M-1 Carbine Badge; and five Overseas / Combat hashmarks for his sleeve. Pete was honored, and was recommended for the U.S. Medal of Honor, by the Colorado House of Representatives on March 22, 2004. Additionally, a United States Air Force General, and several Denver area residents, are determined to see that Pete will receive his much deserved Medal of Honor. Pete was also honored by the Pueblo County Commissioners, and by the Pueblo City Council in July, 2003, for his Heroism and War time accomplishments, and both he, and his wife, Carmen, were honored for their accomplishments as parental role models. After the war, Pete worked at the CF&I (Colorado Fuel and Iron) Corporation as a steel worker, and retired in 1980, after 33 years of service. He was a strong believer in the steel worker's union. Upon retirement, Pete and his wife, Carmen, enjoyed traveling for a brief period of time. He also enjoyed working on cars (was a great mechanic), and working on home improvements. He will be greatly missed. Pete was a member of the Military Order of Purple Heart, Disabled American Veterans and the 29th Division Association. Viewing will be at Montgomery & Steward Funeral Chapel from 10 a.m. to 6 p.m. Tuesday. Rosary service will be held 7 p.m. on Wednesday, eulogies at 1:45 p.m. with the funeral Mass to follow at 2 p.m. on Thursday. Both services at the Cathedral of the Sacred, 11th and Grand. Graveside services, with full military honors by the 7th Infantry Division, U.S. Army, and interment at Imperial Memorial Gardens. Memorials may be made to Sangre de Cristo Hospice through Montgomery & Steward Funeral Directors, 1317 N. Main St., Pueblo, Colorado 81003. Online condolences, www.montgomerysteward.com