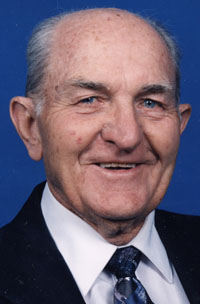 Well done, good and faithful servant. Pastor Dewey L. Heath, 94, of Colorado City, Colo., went home to be with his Lord April 19, 2005. Dewey was born October 10, 1910, in Lawton, Okla. to James and Janie Heath who precede him in death. Pastor Heath was ordained as an Assembly of God pastor. He and his wife, Pearl, who preceded him in death in 1987, led the congregation at the Trinidad, Colo. Assembly of God Church. After his retirement, he continued impacting lives at Praise Assembly of God in Pueblo where he taught classes until the age of 94. He was blessed to love and be loved by his Christian brothers and sisters at Praise Assembly. Pastor Heath is survived by his sister, Zella Campbell of McAllen, Tex; daughter, Wanda Guenzel of Erick, Okla; granddaughters, Pamela Robertson of Sayre, Okla. and Deborah Corey of Altus, Okla; 4 great-grandchildren; 7 great-great grandchildren; 3 great-nephews; and 9 great-great nephews and nieces. Funeral service will be held 2 p.m. Thursday, April 21, 2005, at Praise Assembly of God, 2000 Troy Ave., in Pueblo, Colo., with Pastor Bobby J. Wilson officiating. Graveside service, 11 a.m. Saturday, April 23, 2005, at Davenport City Cemetery in Davenport, Okla. Memorials may be made to Praise Assembly for minister training. Online condolences, www.montgomerysteward.com