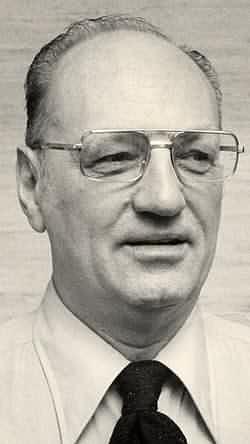 Otto W. 'Tink' Snapp, Jr., 83, passed away February 18, 2002. Survived by his loving wife of 36 years, Lorraine M. (maiden name:Simonich) Snapp, of the family home;sons, Ronald W. Snapp of Norfolk, Virginia, Dr. Bruce R. (Jeanne) Snapp of Alexandria, Virginia; stepson, Scott Moore of Ennis, Montana; six grandchildren; two great-grandchildren; nephew, Kenneth (Lois) Snapp of Canon City; and his cousin, Sarah Barrett of Pueblo. Preceded in death by his father, Otto W. Snapp, Sr. on October 28, 1956; mother, Etta B. Snapp on December 23, 1999; and his brother, Melvin W. Snapp on Aug. 19, 1967. Born to Etta B. (maiden name: Black) and Otto W. Snapp, Sr. on October 30, 1918, in Pueblo and was a lifetime Pueblo resident. Tink was employed by the Minnequa Bank of Pueblo, retiring as executive vice president on March 1, 1984, after 47 years of service. He also served as a member of the board of directors at Minnequa Bank from November 1964 until December 19, 1990. He attended and graduated from Centennial High School. After graduation Tink enlisted in the United States Army Air Force in October 1942 and served overseas in the China-Burma-India Theater and received the Republic of China War Memorial Medal and China Air Force Crew Member Wings. Tink was a member of the First Presbyterian Church and served as a Trustee, Deacon and Elder of the Church; also a member of Silver State Lodge No. 95, A.F. & A.M. and received his 50 year certificate and jewel on January 4, 1997. Life member of the China-Burma-India Hump Pilots Association. Past member of the Veterans of Foreign Wars, Post 61 and American Legion Post 2. Tink was an avid sports enthusiast, participating in fast-pitch softball, baseball, tennis, golf, basketball and football. He officiated High School and College football and basketball games for 23 years and was elected to the greater Pueblo Sports Association Hall of Fame in 1976. He was also elected to the Colorado Bankers Association 50 year club in 1992. The family would like to thank Dr. Thomas Gaide and his staff and Phyllis Gagliardi from Physicians Home Health Care for the special care they gave Tink. He will lie in state at the funeral home today and Thursday from 10 a.m. until 6 p.m. Funeral service will be held 1 p.m. Friday, February 22, 2002, at First Presbyterian Church, 220 W. 10th St., with the Reverend Deborah Kehle Como officiating. Interment will follow at Mountain View Cemetery. The family respectfully requests the omission of food and flowers.