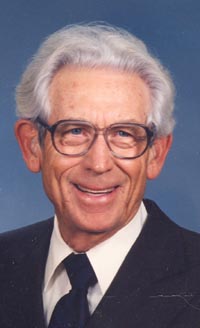 Norman Charles Lemen, 85, of Pueblo, Colo., passed away on Feb. 13, 2007. Survived by his beloved wife of 62 years, Marty; daughters, Sherry (Duane) Richert and Jody (Bill) Hugley; grandchildren, Todd (Alison) Granato, Bret Granato, Chad (Lori) Richert and Mark (Cory) Vasquez; great-grandchildren, Dylan Granato, Kennedy Vasquez and Evan Richert. Preceded in death by son, Harley Dale Lemen; and son-in-law, Gene Granato. Norm was born in Kansas, served proudly in the U.S. Navy and was an inventor and engineer his entire life. He worked for Burroughs for 32 years, was an avid fisherman and camper, and a passionate golfer. Norm was a member and also served as an elder at First Presbyterian Church in Pueblo. Known affectionately as 'Pop-Pop' he was full of life and loved by so many, his laughter touched everyone. His family was most important in his life. Norm will be missed by his family and countless others whose lives he touched. Viewing from noon to 7 p.m. Thursday, February 15, 2007, in the Montgomery & Steward Funeral Chapel with the family present from 4 to 7 p.m. Graveside service, 10 a.m. Friday, February 16, 2007, at Imperial Memorial Gardens, followed by the memorial service, 11 a.m. at First Presbyterian Church, 10th and Court, with the Rev. Dr. Brad Munroe officiating. Those who desire may make memorials to First Presbyterian Church through Montgomery & Steward Funeral Directors, 1317 N. Main St., Pueblo, Colo. 81003. Online condolences, www.montgomerysteward.com