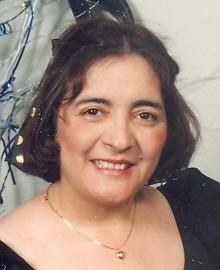 Nora Ann Pena Schultz, 61, passed away April 3, 2006. Nora was born on March 7, 1945, in San Luis, Colo. to the union of Porfirio and Mary Velasquez. The family moved to Pueblo when she was four years old. She was the second eldest of seven children. Nora is survived by her husband, R. J. Black Schultz, M.D.; mother, Mary Velasquez; children, Jacqueline Alexander of Toronto, Canada; USAF Major James (Lena) Pena, stationed at McGuire Air Force Base in New Jersey and Jason Pena of Pueblo West; grandchildren, Regan Pena of Pueblo, Briana and Brisa Pena of McGuire AFB, N.J., all children of James Pena, and Justice Pena of Pueblo West, son of Jason Pena; siblings, Terri Alcarez of Colorado Springs, Colo., Josephine (Frank) Hernandez of Dana Point, Calif., Edward (Carol) Velasquez of Placerville, Calif., George Velasquez of Auburn, Calif. and Debbie Velasquez of San Diego, Calif.; and numerous nieces and nephews. Preceded in death by her father, Porfirio Velasquez; and sister, Vera Quintana. Nora graduated from East High School in 1962 and from Nurse's Training at St. Mary-Corwin Hospital in 1965. She attended the University of Southern Colorado in 1979-80, earning credits towards a teaching degree. In November 1965, she married Floyd Pena, Jr.; the marriage ended in divorce. On April 27, 2002, she married R.J. Black Schultz, M.D. Nora was a member of Christ the King Church, where she served on the Parish Council and was president of the Women's Altar Society in 1977-78. She served as the chairperson of the Cookbook Committee when Christ the King celebrated its 25th anniversary in 1976. She taught elementary and high school religious education classes there on a volunteer basis though the years. She also served as president of the East High Booster's Club when her children attended there. During her professional career, she worked at St. Mary-Corwin Hospital, the Pueblo Community Health Center and at the Pueblo Housing Authority as the Family Self-Sufficiency Program Coordinator. She also served on the Board of Directors of Spanish Peaks Mental Health Center and Pueblo County United Way Board of Trustees. She served as president of Women Spirit, a local women's organization dedicated to educating the public of women's issues. She and Linda Roof initiated the YWCA Chocolate Indulgence to assist in fund-raising for the YWCA Family Crisis Shelter. Nora was also very active in local politics. She will lie in state from 10 a.m. to 6 p.m. Friday, April 7, in the Montgomery & Steward Chapel. Funeral Mass will be held 10 a.m. Saturday, April 8, 2006, at Christ the King Church, 1708 Horseshoe Dr., with the Very Reverend Father Tom Adrians as celebrant. A reception will follow the funeral Mass in the Parish hall. Those who desire may make memorials, in lieu of flowers, to the YWCA Family Crisis Shelter through Montgomery & Steward Funeral Directors, 1317 N. Main St., Pueblo, Colo. 81003. Online condolences, www.montgomerysteward.com