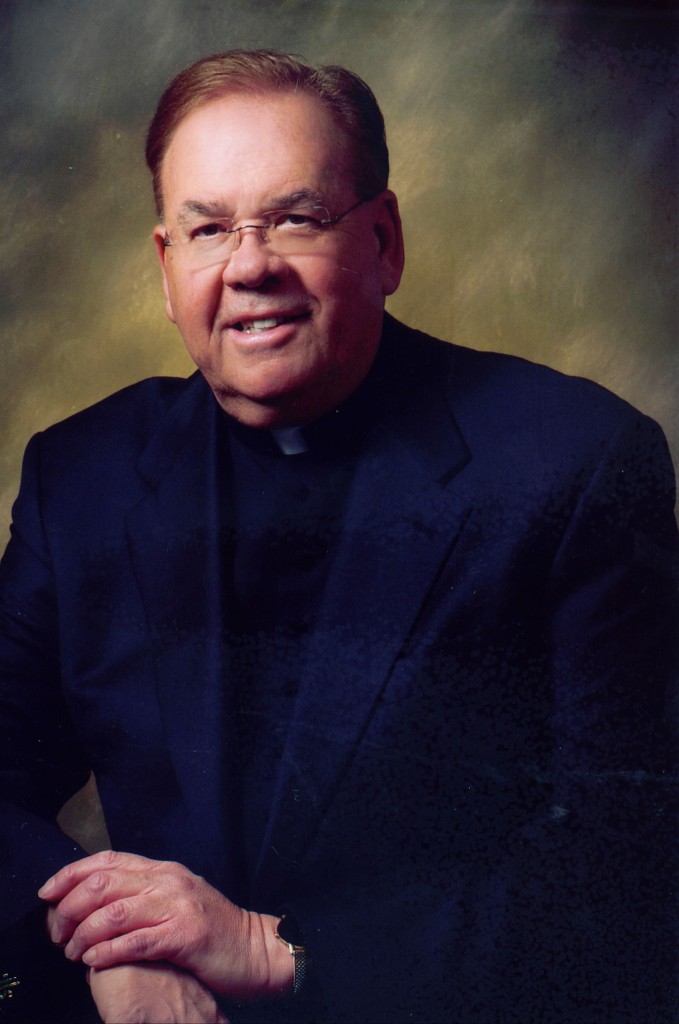 Monsignor Thomas Michael Adrians transitioned to fullness of life the evening of September 15, 2018. Msgr. Adrians was born June 10, 1940, in Hortonville, WI and was the beloved son of Ann E. Loerke RN and Dr. Wilbert Albert Adrians. The family moved to Appleton WI when Monsignor Tom was 3 years old. His sisters, Joan Zimmerman and Sister Susan Ann Adrians SSND and his brother-in-law Bill Zimmerman cherished him. He was a much-loved uncle of Michael Zimmerman, Sara Zimmerman and David Zimmerman along with his grand nieces Myra, Elaina, Emilia and grand nephew Aidan. His family was grateful for his generosity, guidance and support over the years. He was educated at Marquette University, St. Benedict’s College, Holy Cross Abbey, the University of Ottawa, Mount Angel Seminary and Loyola University. Msgr. Adrians was ordained in 1967 at Holy Cross Abbey in Canon City, CO by Bishop Charles Buswell for the Benedictine order. He was formed in the spirit of Vatican II and used his considerable gifts sharing that vision wherever he served. He loved being a priest. Although he had many gifts of administration and leadership, his heart was always with the people of God. He loved God’s word and spent many hours preparing his homilies. He was also involved with Adult Religious Formation in the parishes where he served.
His first appointment was to Sacred Heart of Jesus Parish in Boulder Colorado. He was incardinated into the Diocese of Pueblo in November of 1976 and served many parishes throughout the Diocese: St. Benedict — Florence, St. Mary – Montrose, St. Aloysius — Rye, Holy Family – Pueblo, and for a significant period of time, Christ the King – Pueblo. Msgr. Adrians also served the Diocese as the Director of Catholic Education, as a member of the Presbyteral Council, the College of Consultors, the Personnel Committee, the Diocesan Review Board, the Catholic Foundation, and as Vicar General. He served as spiritual guide of the Benedictine Oblates and was instrumental in their lives. In July of 2012 he was appointed Dean of the Pueblo North Deanery, he acted in this capacity until his retirement August 1, 2014. After retirement, Msgr. Adrians continued to assist the Diocese with Prison Ministry and the Mission Co-op program. He also celebrated Mass at local parishes when needed and at the Primrose Retirement Community. Msgr. celebrated his 50th Jubilee Anniversary as a priest in 2017. He has been called mentor, animator, friend, faithful servant, and family. His legacy lives on in all the people whose lives he touched.
Viewing, 4 to 9 p.m. Thursday, Sept. 20, 2018, in the Montgomery & Steward Chapel. Vigil, 6 p.m. Monday, Sept. 24, 2018, and the Mass of Christian Burial, 10 a.m. Tuesday, Sept. 25, 2018. Both services at Cathedral of the Sacred Heart, 414 W. 11th St. Interment will follow at Roselawn Cemetery with a reception at Adrians’ Hall, Christ the King Parish, Pueblo, immediately after the interment. Online condolences, www.montgomerysteward.com.