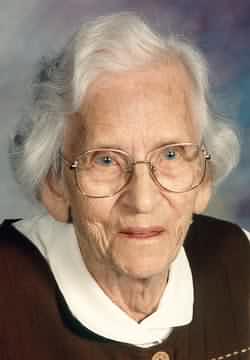 Mildred E. Van Auken, 90, of Pueblo West, Colorado, went to be with her Lord and Savior on December 28, 2000. She was born on September 2, 1910, in Knox, Indiana to Leander and Maude (née Long) Malott who preceded her in death. She was married on November 16, 1935, to Richard Van Auken who also preceded her in death on February 18th of this year. She is also survived by a son, John (Ruth) Van Auken of Pueblo West; grandsons, Jeffrey (Teresa) Van Auken of Pueblo and David (Judy) Van Auken of Evergreen, Colo.; five great-grandchildren, and six great-great grandchildren; sisters, Rose Stantz, Linda Jaske, and Shirley Gumns of La Porte, Indiana; brothers, Charles and Leonard Malott also of La Porte; and numerous nieces and nephews. Preceded in death by two sisters and one brother. She was active for many years in church work and child evangelism and loved to share her faith with others. She was a loving wife of 64 years and a caring mother. Her concern was always for others and she was selfless in her eagerness to help others. She lived in La Porte, Indiana for many years before moving to Pueblo West, in 1996 to live with her son and daughter-in-law. A memorial service will be held at 2 p.m. Saturday, January 6, 2001, at the Ecumenical Church, 434 S. Conquistador, Pueblo West. In lieu of flowers, memorial donations may be made to the Springville Free Methodist Church, La Porte, Indiana, c/o Montgomery & Steward, P.O. Box 777, Pueblo, CO 81002.