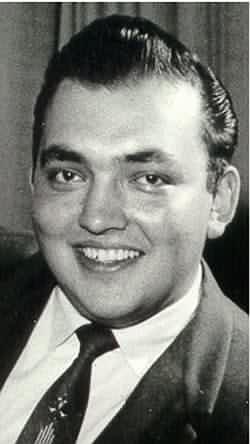 Martin Franklin Mendine II, age 68, died the 26th of February 2001, in Pueblo, Colorado, after a long illness. He was born the 4th of July 1932, in Trinidad, Colorado to Martin F. and Emma M. (née Martin) Mendine. He graduated from Holy Cross Abbey, Canon City, Colorado, in 1950 and the California Radio School of Engineers, Burbank, California in 1951. He joined the Army in 1953 and served in Korea. He later became the Chief Engineer for the Army's Far East Radio Network in Tokyo, Japan, receiving an Honorable Discharge in 1955. A long time Pueblo resident, Martin was employed by KCSJ Radio/KOAA Television from 1955 to 1971. He graduated from Pueblo Community College in 1957. In that same year he married his loving wife of 43 years, Betty L. (née Cox) Mendine. In the 1960's he taught Mass Communications at SCSC later to become USC. In 1965 he began work with the Franklin Companies on a part time basis to later join them full time. He was area manager for the Franklin Companies encompassing Southern Colorado and northern New Mexico from 1971 to 1991. He was a member of The National Association of Life Underwriters, past president of the Pueblo Chapter, instructing their LUTCF classes. He was also a member of the Eagle's, the VFW and the NRA. Preceded in death by his father, M.F. Mendine Sr. and mother, E.M. Mendine. Survived by his wife, Betty L. (née Cox) Mendine of Pueblo West; sons, Martin F. Mendine III of Manitou Springs, Colorado and William K. Mendine of Las Vegas, Nevada; numerous cousins throughout the state and country and lifelong special friends, Joe and Ellie Strilich of Pueblo. Martin was an avid fisherman, rancher and sportsman before his illness. He was a loving and loyal husband and father. There will be no viewing. Cremation, Montgomery & Steward Crematorium. A memorial Mass will be held 11 a.m. Saturday, March 3, 2001, at St. Leander Church, 1401 E. 6th, with Reverend Father Mike DeSciose as celebrant. In lieu of food or flowers, memorials may be made in his name to the Hepatitis Fund International, HFI - 30 Sunrise Terrace, Cedar Grove, New Jersey 07009; (973) 239-1035.