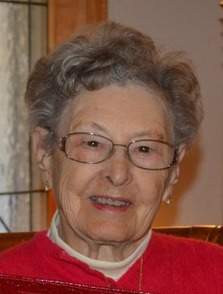 Martha Lillian Swanson Beaver, born September 15, 1921, in Kansas City, Mo. to the union of Axel and Bertha (Persson) Swanson. Passed away July 11, 2015, in Pueblo.Preceded in death by her parents; brothers, George Swanson and Robert Swanson; sister, Myrtle Swanson and her husband, Ernest Loyd Beaver. She is survived by her children, Richard Beaver of Boorowas, Australia, Donald Beaver (Margaret) of La Porte, Colo., Deborah Beaver of Dover, Del.; Diane Clark (Dumont) of Pueblo and Jan Beaver (Vickie) of La Porte, Colo. She is survived by her sister, Linnea Okes of Desert Hot Springs, Calif. She is also survived by many grandchildren, great-grandchildren, nieces and nephews. She was born in Kansas City, Mo. When she was two years old the family moved to Los Angeles, Calif. where Martha grew up. The family moved to Craig, Colo. in 1938. Martha graduated from Moffat County High School in 1939. She met Loyd Beaver in Craig and they married June 1, 1941, in Hamilton, Colo. They lived many places but the longest time in Craig. Loyd passed away in 1968; Martha moved from Craig to Fort Collins, Colo. in 1977. In Fort Collins she worked in the banking industry. She retired in 1997 at age 76. She was active in White Cross, Scandinavian Heritage Club, Hardy Hikers, and Faith Evangelical Free Church. She loved hiking in the mountains, classical music, and art. She moved to Pueblo in 2013 to be near her daughter. Special thanks to the nurses in the Stroke Unit at St. Mary-Corwin Hospital, nurses at Sangre de Cristo Hospice Joni Fair Hospice House, Primrose Assisted Living, and Dr. Jim Stjernholm. Services will be held in Craig, Colo. Memorial contributions may be made to the Gideon Bible Society, P.O. Box 2178, Pueblo, CO 81004. Online condolences, www.montgomerysteward.com