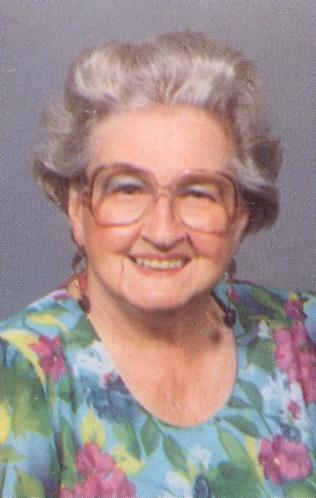 Marion LaTrelle Needham Stock, born May 29, 1921, to Louis M. Needham, a motion picture projectionist, and Molly Francis Dick, housewife, in Pueblo, and had to be rescued from their home in the flood of '21. LaTrelle graduated Centennial High School in 1940, and Business School, and married Hubert I. Stock (Cy her nickname for Hu) 1939 graduate of Centennial, in February 1942, Long Beach, Calif. Cy enlisted in the Army Air Corps. Daughter, Margaret Eileen 'Peggy' was born in Long Beach, Calif. in 1943. WWII ended, they returned to Pueblo, Pamela Ann was born in 1947; Cy worked at the old CF&I Steel Mill for 30 plus years. LaTrelle was a Girl Scout leader, sold Avon products for 18 years, one of the first volunteer docents at the Old El Pueblo Museum, volunteered at Parkview Hospital for many years, and was a member of the Sweet Adelines chorus. She and Hu were active members in the Republican Party, the Pike's Peak Sports Car Club, the Four Wheel Drive Club, and the Civil Air Patrol. LaTrelle was a writer of children's stories, poems, and newsletters for the many organizations in which they belonged. She had a soft spot for cats, raised many strays and orphans, just ask the Pueblo Small Animal Clinic and the many friends and neighbors she convinced to adopt one or more. LaTrelle was preceded in death by her Cy on July 4, 1987, and companion Woody Riegel. She is survived by Peggy of Sedgwick, Colo. and Pam, her caregiver since 2002; granddaughter, Levis Pamela Owens (Tony Iton); great-grandson, Satchel Wilkinson; great-granddaughter, Ella Iton of San Francisco, Calif.; Marvin 'Mel' Owens III (Dara) of Lakewood, Colo.; great-granddaughters, Ashley and Samantha Owens also of Lakewood, Colo. As per her request, there will be no viewing. Cremation, Montgomery & Steward Crematorium. In lieu of food and flowers, donations should be made to Divine Science Church, 115 E. Routt Ave., Pueblo, CO 81004, where she had been a member for over 30 years, Sangre de Cristo Hospice and Palliative Care, 1207 Pueblo Blvd. Way, Pueblo, CO 81005, or Pueblo Animal Services, P.O. Box 818, Pueblo, CO81002. Memorial service, 2 p.m. Friday, March 25, 2011, at Divine Science Church, with the Rev. Earleen Cornell officiating. Online condolences, MontgomerySteward.com