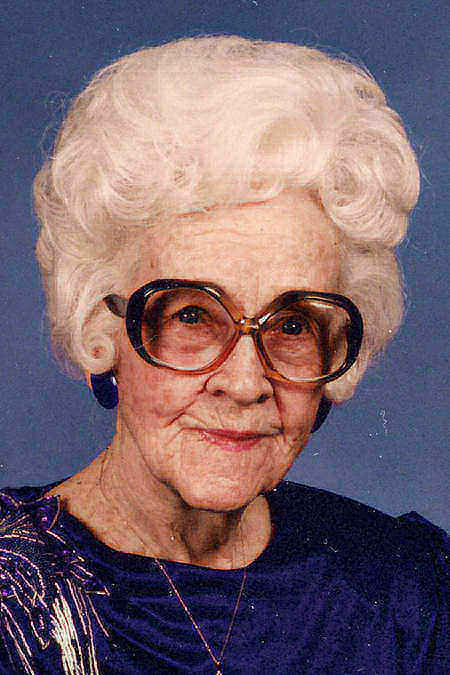 Margaret E. Woodward, 100, passed away July 14, 2011. She was born on Oct. 9, 1910, in Olney Springs, CO. Preceded in death by her beloved husband of 51 years, Lumen Woodward; parents, Edmond and Georgina Horne; sisters, Lucille Hubersberger and Helen Rickords; and brothers, Walter and Leon Horne. She is survived by daughter, Georgina (John) Kelly Pueblo; and son, L. Barry Woodward, San Diego. Also survived by two wonderful grandchildren, Rochelle Kelly DeVargas and Todd (Laura) Kelly Pueblo; and three wonderful great grandchildren, Trent and Jillian Kelly and Dex DeVargas, Pueblo. She is also survived by her only niece, Reta (Jim) Black, Pueblo West and great-niece and nephew, Rebecca Black, Big Rapids, Michigan and Chris Black, Tucson, Ariz. She was a member of the First United Methodist Church, Daughters of the American Revolution, Daughters of the Nile, and Pueblo Musicians Association. Margaret was a gifted professional musician never taking a piano lesson or learning to read music but played by ear from the age of 5 and could play with any musician or accompany any vocalist or play any song requested and was called upon to accompany Gene Autry, Tony Bennett, Rex Allen and anyone else that came to perform in Pueblo. She graduated from Centennial High School in 1930 and moved to Pasadena, CA , played with various bands and also as a solo at Santa Anita Racetrack and other Venues in the area. She had a contract at a Piano Bar in Pasadena where Red Nichols and the Five Pennies (which included Tommy and Jimmy Dorsey and Benny Goodman), had a reserved place and would come down to listen to her during their breaks. She played at the Colorado State Fair on top of the Flower Show in the Ag Building and in Charlie Quaranta's State Fair Band for 30 years. She was also the House Organist at the Pueblo Country Club, Jersin's Top of the Town Restaurant and Organist for the Pueblo Dodgers Baseball Team at Runyon Field. She also played for many different celebrations and events in Pueblo as well as at the big Hotels in Pueblo during the 1950's that were so elegant. Margaret and her husband Lou, who was also an accomplished Trumpet player, formed their own band and traveled together with their own band after marrying in 1938. They had Radio Shows in many towns between Colorado and California as Radio was the only source of entertainment. They returned to Pueblo in 1940 and continued their music playing in Charlie Quaranta's band and their own group called the Aristocrats. Margaret has continued to play the piano up until a few weeks ago at the Pavilion Villa Pueblo Nursing Home for the other residents. She had a wonderful life of music shared with her husband and brought great enjoyment to others. Special thanks to the day and afternoon shifts at Pavilion Villa Pueblo Nursing Home who took such wonderful care of Margaret the past three months. Special thanks to Dr. Larry Walls who cared for her from the beginning of his practice in Pueblo to retirement, 'she loved her Dr. Walls.' There will be no viewing. Funeral service, 10:30 a.m. Monday, July 18, 2011, at First United Methodist Church, 11th and Court St., with the Reverend Dr. Rick Calhoun officiating. Interment, Imperial Memorial Gardens. In lieu of food and flowers, memorials may be made to the Pueblo Song Writers and Musicians Association or the Campaign for Breast Center of Excellence at St. Mary Corwin or CSU-Pueblo Athletics through Montgomery & Steward Funeral Directors, 1317 N. Main St., Pueblo, CO 81003. Online condolences, MontgomerySteward.com