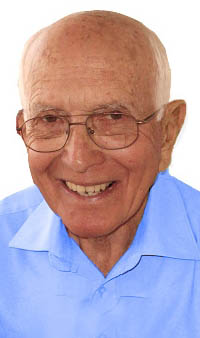 L. Thomas 'Tom' Corzine, born December 25, 1921, joined his Lord in Heaven on March 8, 2010. Tom's wife, Doris, preceded him in death on April 24, 2006. They had a wonderful 61-year marriage and are together again. Tom is survived by his children: Jerry (Colleen) Corzine and Leslie (Sonny) Martinez; grandchildren: Barry Corzine and Megan Corzine; Erika (Kevin) Slaughter; Devin (Kristin) Martinez; Beth Martinez; and Aly (David) Curtis. He was also blessed with great grandchildren: Brooke, Zach & Kayla Slaughter; Ella, Sophia and Marisa Martinez; and baby girl Curtis due in May. Tom was born in Balcom, Illinois. His mother was a widow with two boys, and his father was a widower with two girls when they married and had four more children. Tom was the youngest in the family and now the last one to pass away. Tom served in the Air Force during World War II before settling down with a wife and children. Tom loved music and especially liked to dance. In fact, he met his bride at a military dance during the war. He was born to be a salesman and was successful in anything he sold; he earned many awards and honors during his career. Tom and his son had a thriving business venture in C-Tom Insurance, earning the respect and serving the needs of many Puebloans. He will be remembered as a man who loved his family deeply, a man who realized he had been mightily blessed in his lifetime. He was a generous, hard-working man, a loving father, grandfather and great-grandfather. Tom-Dad-Grandpa – we love you deeply, and you will be greatly missed. Service, 11a.m. Friday, March 12, 2010, at Family Worship Center, 3800 Parker Blvd., with Pastor David Smith officiating. Final resting place, Mountain View Cemetery. Memorials may be made to Gideons International through Montgomery & Steward Funeral Diectors, 1317 N. Main St., Pueblo, CO 81003. Online condolences, MontgomerySteward.com