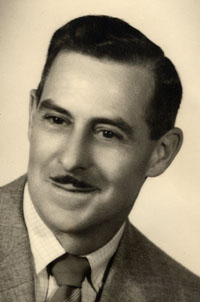 Kenneth H. Fugier, 91, passed away March 22, 2004, in Pueblo, Colorado. Born to Edward and Nora Fugier, April 27, 1912, in Ravanne, Kansas. He was their third son, followed by two sisters. All precede him in death except his younger sister, Frances McClure, of Santa Clara, California. Ken was raised in South Dakota where his father homesteaded. He moved to Shelbina, Missouri and then to Avard, Oklahoma. After finishing high school there, he attended Alva University at Alva, Oklahoma. In 1936 he moved to Denver, Colorado where he went to work for Union Pacific Railroad. He worked for Union Pacific for 38 years, retiring as a supervisor of Motor Power in Kansas. Survived by his wife of 36 years, Betty; 3 children, Richard Fugier, Barbara Holt and Gary Fugier; 2 stepchildren, Terri Patton of Port Orchard, Washington and Bruce Eichelberger of Navarre, Kansas; 9 grandchildren; 1 step grandchild; and 13 great-grandchildren. He was very proud of all his children and grandchildren, which he called his 'legacy.' Kenneth loved life and lived it fully, enjoying each moment. He and Betty enjoyed ballroom dancing and went dancing every Saturday night for as long as he was able. Member of the Masons, Eastern Star, Consistory, Shrine, Moose, Elks and Eagles lodges. Most recently, an active member of Eagles Lodge, Aerie No. 145, REAC Club and NARVRE (National Association of Retired & Veteran Railway Employees). Kenneth was so pleased that he could be cared for at home by hospice, as he was very devoted to his wife. At his request, his body has been donated to science, with no services. Those who desire may make a memorial contribution to Sangre de Cristo Hospice through the funeral home. Online condolences, www.montgomerysteward.com