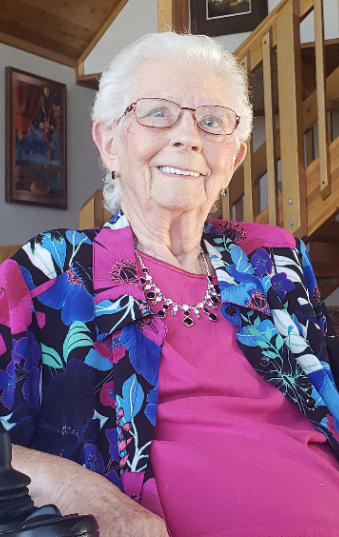 Joyce M. (Running) Janssen, 89, was born on Jan. 9, 1931, in Almond, Minn. to LuVerne and Laura (Casper) Running. She was raised on her parent’s farm and graduated from Graceville High School. She married Keith L. Janssen on March 19, 1950, in Graceville, Minn. They later moved to North Dakota and began their time owning and running a chain of Ben Franklin Stores which they continued until they retired. They raised two sons and two daughters together and spent their time between their homes, and weekend getaways at their cabin at Lake Metigoshe. Joyce was always a wonderful homemaker and loved cooking and baking. She also enjoyed spending time with her many friends and was very involved with her church. Her favorite hobbies have always been quilting and sewing. She also enjoyed knitting, crochet, hardanger and other forms of needlework. Joyce passed away on Sept. 24, 2020 at the home of her youngest daughter, Pam, in Beulah, Colo. She was preceded in death by her parents, LuVerne and Laura (Casper) Running; and her husband of 65 years, Keith Janssen. She is survived by her four children, Cynthia (Rick) Johnson of Mandan, N.D., Lee (Bonnie) Janssen of Queen Creek, Ariz, Jay (Rose) Janssen of Devils Lake, N.D., and Pam (Justin) Youngren of Beulah, Colo; eight grandchildren, Darrell Johnson, Justin Johnson, Travis Johnson, Lisa McAndrews, Aaron Janssen, Brandon Janssen, Jennifer Johnson and Janelle Hanson; and 16 great-grandchildren.   Interment, 3 p.m. Oct. 5, 2020, where she will be laid to rest alongside her husband at the North Dakota Veterans Cemetery in Mandan, N.D. Online condolences, www.MontgomerySteward.com