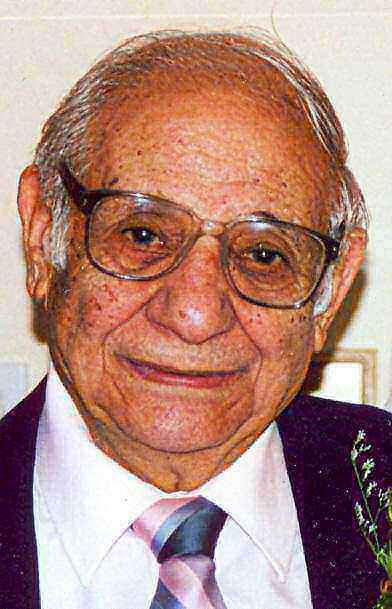 John J. Simony, 92, passed away November 29, 2008, was born in Pueblo, Colo., December 21, 1915, to the union of Peter and Rose Simony, who came to the United States from Hasroun, Lebanon, in 1909. He was the third of six children. The Simony family lived and owned a dry goods store in 'the grove' until the flood of 1921. The flood destroyed their store and home, but not their spirit. They re-opened their store a few months later on Northern Avenue. John graduated from Central High School in 1935. He joined the US Army in 1942 and served in the European Theatre during World War II. He achieved the rank of Technical Sergeant in the Army Air Corps and on November 1, 1943, he was assigned to operation 'Overlord' in London. He was awarded the EAME Ribbon with five bronze stars and was awarded the Bronze Star for his meritorious service. While stationed in England, John met and married the love of his life, Daphne M. Houghton. Before the War and after his honorable discharge until 1958, John worked for Weicker Storage and Transfer Company as a bookkeeper. He later went to work at Broderick and Gibbons Paving firm as an accountant from 1958 until his retirement in 1980. John was preceded in death by his parents; brothers, Anthony (Marie), George (Genevieve) and Jack (Peggy), his sister, Catherine; nephew, Michael; and niece, Barbra Ann. John was survived by his loving wife of 63 years, Daphne of the family home, his daughters, Therese Marie (David McNeilly) Simony, Pueblo; Annamarie (Carl) Covi, Pueblo; grandchildren, Tiana Woodruff, Denver; Christopher Woodruff, Pueblo; great-granddaughter, Isabella Woodruff, Denver; brother, Edward (Agnes) Simony, Pueblo; nephews, James (Marilyn) Simony, Robert (Jeanie) Simony and Paul Simony; niece, Joyce Ann (Greg) Laney; and numerous great and great-great nieces and nephews, all of Pueblo. John loved his God, his country and his family. Viewing from 4 to 6 p.m. Tuesday in the Montgomery & Steward Chapel. Funeral Mass, 10 a.m. Wednesday, Dec. 3, 2008, at Our Lady of the Meadows Catholic Church, 23 Starling Drive, with the Reverend Father Kevin Novak as celebrant. Military honors by Pueblo Veterans' Ritual Team and interment will follow at Imperial Memorial Gardens. The family would like to thank Dr. John Highfill, and Sangre de Cristo Hospice, especially Allan and Wade , for their loving care giving. In lieu of food and flowers, the family respectfully requests contributions be made to Sangre de Cristo Hospice through Montgomery & Steward Funeral Directors, 1317 N. Main St., Pueblo, Colo. 81003. Online condolences, www.montgomerysteward.com