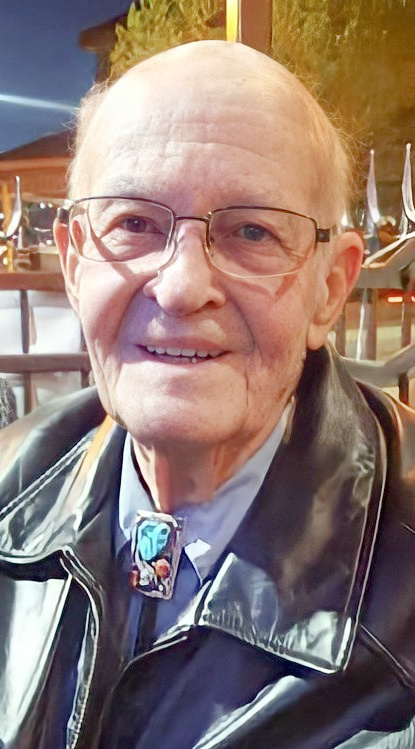 John Berton Cooper was born in Celestine, Okla. on December 29, 1924, and passed away at 96, on August 1, 2021. He is survived by his twin sons, John and Jim; special friend, Sandra Thomas; numerous nieces and nephews; childhood friend, Buster Miller; and many other friends and extended family. He was preceded in death by his wife, Marjorie; parents, Louis and Ethel Cooper; brother, L.J.; sisters, Catherine Mitchell, Billie Perry, and Natalie Loomis; and nephew, Kenneth Cooper. Bert served in the U.S. Navy Air Corps in WWII, chiefly as a radio operator, with various other duties on the airplanes in which he flew. After serving our country, he attended and graduated from Pueblo Junior College with a degree in Business. He met his future wife, Marjorie Ella Krout, in Pueblo, Colorado, and they were married on August 14, 1948, after which he began a long career at the C.F.& I. Steel Corporation. After working more than 30 years at C.F.&I., he retired in 1983. He was immediately persuaded by Jim and John to help them in their musical pursuits. He started out as a “roadie,” and eventually climbed his way up the musical staff to lead singer of their band, The CooperSonics. Bert was a member of Masonic Lodge No. 17, Pueblo Al Kaly Shrine, and B.P.O.E. Elks Lodge # 90. He enjoyed his weekly fishing trips and lunches with Buster Miller, and he especially enjoyed spending countless hours at his basement workbench, repairing, inventing, and building just about anything you could imagine. His stock of tools made him the go-to tool man for the entire neighborhood. He loved camping, traveling, and taking good care of his home and yard. More recently, his main duty was entertaining and being a good companion for the family cat, Winnie. After a good meal, he could often be heard exclaiming, “If I’m not mistaken, we’re having banana splits!” A visitation for Bert will take place 3 to 5 p.m. Sunday, August 8, 2021, and a funeral service will be held 10 a.m. Monday, August 9, 2021, both in the Montgomery & Steward Chapel. Interment, Imperial Memorial Gardens. In lieu of flowers, please make a donation in Bert’s name to your favorite charity. Online condolences at www.MontgomerySteward.com