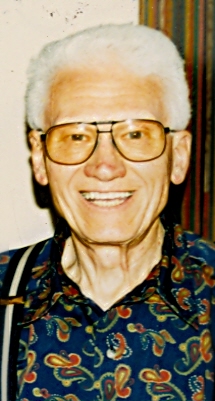 John B. Holiman, 85, died on October 30, 2012, while under the compassionate care of Sangre de Cristo Hospice. He was preceded in death by his parents; sister, Ann and brother, Bob. John was born in Sheridan, Arkansas to Aubrey Holiman and Mineola Duncan Holiman. He attended Sheridan High School, graduating at age 16. Sometime after graduation, John joined the Army and served during World War II. Upon his return from the war, John began his college career. He graduated from the University of Arkansas in 1949, where his name still appears with other graduates permanently etched into the sidewalk in front of Old Main. After graduation, John went west seeking wide open spaces. John's career began at Pueblo's Montgomery Ward as assistant manager, where he met his wife of 62 years, Edie Riva. Defying Montgomery Ward's 'non-fraternization' policy, they were married on June 13, 1950. His career path next took him to Jackson Chevrolet, where he began a 50 year career in insurance. Hired later as an agent at the Abell-Beatty Agency, John progressed to partner and eventually, owner. He retired at age 50, but it didn't last. After starting All Risk Insurance in Pueblo and All Drivers Insurance, in Colorado Springs, he retired again at age 70. John loved Colorado and its mountains. As a long time member of the Colorado Mountain Club, John climbed all of Colorado's fourteeners, in addition to peaks in Mexico and Switzerland. He began running as a way to stay in shape for climbing and it eventually became a passion. He began running competitively in his 50's, competing in many 10K and ten mile runs, a duathlon and four marathons. He ran his last race at age 80. John also loved Pueblo and was an active community supporter and volunteer for over 50 years. Beginning with the Pueblo Jaycees, John was a board member or otherwise involved with the Pueblo Greenway and Nature Center, Lions Club, United Way, Meals on Wheels, Keep Pueblo Beautiful, the 2010 Commission for Education and Lifelong Learning Task Force, and the PEER Committee for college scholarships for Pueblo high school graduates. He had a tremendous world view and was a strong proponent for education for all, regardless of circumstance. John is survived by his sisters, Aulene Kanakis of Joplin, Missouri and Bette Williams of Fayetteville, Arkansas; his two daughters, Karen Holiman of Colorado Springs and Linda Brading of Littleton; his grandchildren, Sean Brading and Kelsey Brading. Many nieces, nephews, and cousins mourn his loss. John will be remembered for his giving spirit, his intelligence and his joie de vivre. A memorial service celebrating his life will be held at 11 a.m. Saturday, Jan. 12, Montgomery & Steward Chapel. Memorial contributions may be made to The Nature and Raptor Center of Pueblo, P.O. Box 8295, Pueblo, CO. 81008. The funds will go towards a bench dedicated to our parents at the Nature Center. Online condolences, www.montgomerysteward.com *******