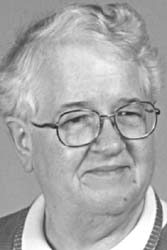 Janet Hall, 80, died peacefully on April 30, 2004, in Pueblo, Colorado. She was born on October 25, 1923, in Madison, Wisconsin, to John Beall Hall and Janet Garlichs Hall, both deceased. For almost fifty years, Janet was a well-known figure in the musical and church life of Pueblo, Colorado. Literally hundreds of children sang in her choirs, her church music programs, and participated in her summer choir camps. In addition, she taught piano, voice, and organ. Miss Hall received a degree from Smith College, and a masters degree from Union Seminary in New York City. She served as organist and director of Christian education at St. Thaddeus' Church, Aiken, SC, from 1946 to 1949. She then moved to Williamsburg, Virginia, to be assistant organist and director of Christian education at Bruton Parish Church. From 1957 to 1988 she served as organist and choirmaster at Ascension Episcopal Church. She was the founder and director of St. George Men and Boys Choir and the St. Cecilia Choir. In addition, from 1963 to 1972, she was Assistant Professor of Music at the University of Southern Colorado. Miss Hall was a prolific composer of choir anthems and handbell music. Her music has been performed by local and nationally-known choirs, including her own choirs, the Schola Cantorum Chant Choir, and Ars Nova. Her plainsong setting of the Kyrie is published in the Episcopal Hymnal 1982. The STEP program has published her handbell music. Ascension Church honored her with a concert of her music in May 2003. She was a long-time active member of the Association of Anglican Musicians and of The American Guild of Organists. Janet Hall is survived by two brothers: John and his wife Mary of Johnson City, Tennessee, and David and his wife Janet of Eagan, Minnesota, as well as numerous nieces and nephews. A memorial service will be held 1 p.m Saturday, May 8, 2004, at Ascension Church, (Grand Ave. and W. 18th St.) Former students, choir members, and colleagues wishing to be part of the choir at this service should meet at the church at 10:30 a.m. on Saturday. In lieu of flowers, memorials may be made to Ascension Episcopal Church, 420 W. 18th Street, Pueblo, CO 81003. Online condolences, www.montgomerysteward.com