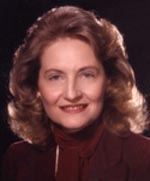 Jane Braucher Fugate, a Pueblo resident since 1985, lost her long and courageous battle with cancer on October 20, 2003. She was born in Wichita, Kansas, October 1, 1938, to the union of Justus and Josephine 'Jack' Fugate, and was preceded in death by her father. Surviving to cherish her memory are her beloved mother and best friend, Josephine 'Jack' Fugate; her loving husband, Gilbert A. Sanchez; sons, Joseph (Danielle) Sieverling of Arlington, VA and David (Jenny) Sieverling of Denver, CO; brothers, Brauch (Judy) Fugate of Lexington, KY and Justus Fugate of Wichita, KS; stepchildren, Valerie (Patrick Amaku) Sanchez of Plano, TX, Mark Sanchez (Steve Perkins) of Beverly Hills, CA, and Ronald (Janis Bottai) Sanchez, Alan Sanchez, and Ericka Sanchez, all of Tucson, AZ; grandchildren, Taylor Jane Sieverling, Raymond Sanchez, Gabrielle and Dylan Sanchez, Margaret and Patricia Amaku, and Tiare Barrett; nieces, Christine (Jeff Jacobs) Fugate of Los Angeles, CA, Mary Ann Fugate of Lexington, KY; nephew, Kenneth (Nancy) Fugate of Wichita, KS; grandnephews, Alexander and Benjamin Fugate; and grandnieces, Caterina Alida, and Sara Jeanne Jacobs. Jane was enrolled at Colorado College in Colorado Springs at the age of 16, transferring later to the University of Kansas, where she earned her Bachelor's degree in mathematics. She then went on to the University of Missouri in Kansas City to receive her Master's degree in Public Administration. At the young age of 56, she received her Bachelor's degree in nursing from Beth El College of nursing and was valedictorian of her class. Jane had several interesting and gratifying career experiences. In Kansas City, she worked for the US Corp of Engineers, and was a fundraiser for a non-profit adolescent agency. In Pueblo, she provided public relations services for Pueblo Peak Health, served as Director of the Pueblo Agency on Aging, worked as a nurse at La Junta General Hospital, and also as a nurse at Sangre De Cristo Hospice. Before becoming ill, she held a nursing position at the San Carlos Correction Facility. Jane pursued a variety of interests during her life. Her interest in penal reform issues led the Governor of Kansas to appoint her to a blue ribbon committee which recommended reforms to the Kansas Penal System. She was subsequently elected to serve on the Board of Directors of the National Council on Crime and Delinquency. As a result of her interest in mental health, she served as President of the Kansas City Mental Health Association and as Chairperson of the Wyandotte County (Kansas) Mental Health Center Board of Directors. Her interest and active participation in mental health issues led to her election to the Board of Directors of the National Council of Community Health Centers. Her interest in women's issues directed her to serve in leadership positions with the League of Women Voters in Kansas City and to become co-founder of Women's Spirit in Pueblo. She also founded the Watering Hole, a women's discussion group in Pueblo, modeled after a similar group to which she belonged in Kansas City. In 2003, Jane was honored in the Wichita State University Plaza of Heroines for her kindness, courage and commitment to women's issues. To complement her many achievements, Jane was also very adventurous and undertook challenges that others just dreamed about. She rafted the Colorado River through the Grand Canyon, went kayaking in the Pacific Ocean near the Washington coast, and began roller-blading and bicycling at the age of 47. She also enjoyed dancing and all of the performing arts. At the time of her death, she served as Vice President of the Pueblo Symphony Board of Directors. Additionally, Jane enjoyed foreign travel, and visited many western and eastern European countries and Canada. She was an avid reader and a serious student of the American Civil War and English History. Of all her qualities, Jane will be best remembered for her kindness, optimism, courage, and the love she shared with all who knew her. Her talent, commitment, and wisdom have been an inspiration to those who were fortunate to have known her. She valued life, treasured her many friendships and her greatest passion was her love for her family; but her greatest pride and joy were her grandchildren whom she adored. She is already missed by all who loved her. The family will receive friends at Montgomery & Steward Funeral Directors, 1317 N. Main St., Pueblo, Colorado, Thursday from 5 to 7 p.m. Funeral service will be held 10 a.m. Friday, October 24, 2003, at Central Christian Church, Disciples of Christ, 1902 Hudson, in Pueblo, Colorado. Services in Wichita, Kansas: Interment, 12 noon Monday, October 27, 2003, at Old Mission Cemetery, followed by a memorial service 2 p.m. at Hillside Christian Church. In lieu of flowers she requested that donations be made to: Sangre De Cristo Hospice or to The Pueblo Symphony Association, c/o Montgomery & Steward Funeral Directors, P O Box 777, Pueblo, CO 81002