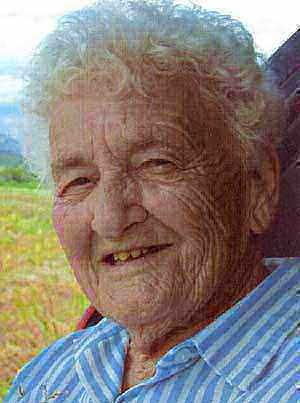 Iris Hoopes, 87, passed away Aug. 12, 2008. Survived by her children, Lynne L. Bacon-Applegate of Florence, Colo., Sandra S. Mitchell of Pueblo and Richard L. 'Dick' Hoopes of Pueblo; nine grandchildren; and 13 great-grandchildren. Preceded in death by her husband, Lynn R. Hoopes on June 16, 1993. Iris was born to Myrtle E. (Maiden name: Hodson) and A.C. Gangloff on Jan. 30, 1921, in Protection, Kans. Iris had a 'can-do'attitude. While her husband was overseas, during WWII, Iris answered President Roosevelt's call for women to become involved in the war effort. She and her young daughter moved to Seattle, Wash. to work in the shipyards where she became a Master Welder. When she returned to Pueblo, she continued her devotion to her country by driving ammunition trucks and chauffeuring military personnel to Colorado Springs. When her husband returned from the war, they worked together, hand-in-hand, at their sawmill business. Eventually, along with Marge and Tom Gunter, she owned and managed Inch By Inch, a fitness salon. Music and her church, First Friends Church, were also an important part of her life. She trained musicians in the church's congregation and family members. Iris was wise, gracious, witty and fun. She never criticized; instead encouraged people. She liked everyone and everyone who knew her liked her as well. She will be sadly missed. Viewing, from 10 a.m. to 1 p.m. Friday at the funeral home. Private graveside service at Imperial Memorial Gardens, followed by a memorial service, 4:30 p.m. Friday in the Montgomery & Steward Chapel. The service will be officiated by Pastor Mark Hecht of Free Methodist Church. Reception to follow in the Montgomery & Steward Banquet Hall. Online condolences, www.montgomerysteward.com