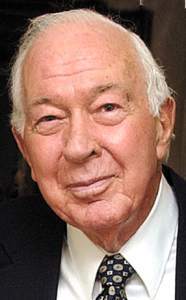 Henry 'Hank' Williams, a pioneer in the banking industry and longtime community benefactor and supporter, died Tuesday, Dec. 30, 2014, at the age of 96. During his banking career, Williams served as president of First National Bank of Florence; director of First State Bank of Fountain; and, most notably, president, chairman of the board and CEO of United Bank in Pueblo. Williams entered the banking world through his father-in-law, Richard Trefz, founder and first president of the Arkansas Valley Bank (later United Bank). The towering building at the corner of Eighth and Main streets, which now houses Wells Fargo Bank, was built during Williams' tenure as United Bank president. In 1969, he was elected to lead the Colorado Bankers group. Williams' civic activism knew few bounds. He was a tireless champion for Pueblo, especially those with less. He served as president of the chamber of commerce, established the Pueblo Development Foundation and was involved with Kiwanis Club, Jaycees, Pueblo's War on Poverty, United Way, Southern Colorado Economic Development District and Pueblo Regional Planning Commission. Williams' service on other boards, committees, foundations and organizations would be too lengthy to list. Of his lifetime of serving others and the community, Williams had this to say in a 2002 Pueblo Chieftain spotlight on his life: 'It's because of my philosophy on banking. A bank, besides being a trust for the money the customers put there, also has a responsibility to the community. It needs to put its resources behind the community and try to help improve it.' Traveling was one of Williams' passions. Along with his wife, Ernamarie, he visited more than 50 countries and all 50 states. The couple celebrated their 61st wedding anniversary a day before Williams' death. 'I think Hank will be remembered most for his work with Pueblo's War on Poverty,' said Mrs. Williams. 'Hank was very civic-minded and also wanted the bank to grow. The bank offered what was unusual in Pueblo at that time — money when you didn't have it.' 'That was his banking philosophy — funding people with wonderful ideas. He loved to lend money.' In addition to Hank's wife, Ernamarie, he is survived by his children, Eleanor Williams Clark, Lisa Williams Ireland and Richard Williams. Services for Williams, handled by Montgomery & Steward Funeral Directors Inc., will be held at 2:30 p.m. Friday, Jan. 2, 2015, at Ascension Episcopal Church, 410 W. 18th St. Memorials may be made to Sangre de Cristo Arts & Conference Center, 210 S. Santa Fe Ave., Pueblo, CO 81003. Online condolences, www.montgomerysteward.com