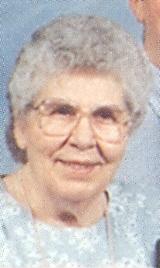 Helen Joyce Wallace died November 15, 2008, at the age 80, after a long illness. Survived by her son, P. James Wallace, Jr. (Jan Fargo); brother, Ralph Leonard (Donna); sisters, Elsie Staten (Bill) and Carol Smith; 11 nephews and nieces and their families; seven cousins and their families; and the decedents of her half-brother and half-sister. Preceded in death by her husband of 49 years, Preston J. Wallace; brother, William D. Leonard, III; half-brother, Robert Virgil 'R.V.' Leonard; and half-sister, Maxine Allen. Helen was born on May 15, 1928, on a farm near Punkin Center, Colorado, moved to and grew up in Sugar City, Colorado, where she graduated from High School in 1946, and moved to Pueblo with her parents as a young adult in 1950. She was a telephone operator for 12 years, from 1944 to 1956, in Sugar City and Pueblo. For 37 years, from 1956 to 1993, she was co-owner and co-manager with her husband, Preston Wallace, of Fountain Foundry, Inc. She started as the bookkeeper, took on more managerial responsibilities as the business gradually grew and became more complex, and became the general manager as her husband became ill in the late 1980's and early 1990's. She received a nomination for Pueblo Business Woman of the Year from the Pueblo Business Women's Network. She was an active member of Bethel United Methodist and First United Methodist churches. When she first arrived in Pueblo in 1950, she was a member at First Methodist. After her marriage in 1953, she joined her husband as a member of Bethel Methodist. In 1977, she and her husband left Bethel to return as members of First United Methodist. While active at Bethel, she was an organizer and leader of many youth activities and programs, including the youth choir for whom she was also the piano accompanist. While active at First United Methodist, she worked with young adults and community outreach programs and she served on the board of trustees.Helen was involved with Cub Scouts and Boy Scouts. She was a Den Mother for Cub Pack 2 at Bethel United Methodist from 1964 to 1966. She provided a lot of behind-the-scenes support for her husband's scoutmaster work and her son's participation with Troop 2 at Bethel United Methodist Church from 1953-1960 and from 1966-1972. In her retirement, she was supportive of community charities, researched family genealogy, and taught water aerobics at the YWCA. She had a life-long enjoyment of music and spent many hours playing the piano and the baritone horn. She was a member of Pilot's Club and the Pueblo Business Women's Network. She was a member of Bell women, an informal organization of former Telephone Company employees. The family wishes especially to thank the numerous caregivers of Argus Home Care, Home Instead Senior Care, and University Park Care Center who gave Helen an unusually high level of care and quality of life during the years of her final illness. Viewing, from 10:30 a.m. to 6 p.m. Tuesday at the funeral home, with the family present from 4 to 6 p.m. Funeral service, 2 p.m. Wednesday, Nov. 19, 2008, at First United Methodist Church, 11th and Court, with the Reverend Dr. Rick Calhoun officiating. Entombment, Mountain View Cemetery Chapel Mausoleum. Charitable donations may be made to Pueblo Cooperative Care through Montgomery & Steward Funeral Directors, 1317 N. Main St., Pueblo, Colo. 81003. Online condolences, MontgomerySteward.com