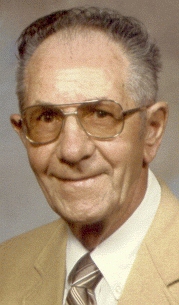 George Nicholas Boedecker, 86, longtime resident of Pueblo, died Tuesday morning, August 28, 2001, surrounded by the comfort of home and family. George was born September 10, 1914. He attended Central High School and Pueblo Junior College. On March 3, 1939, he married Ethel Yoder and they spent 62 wonderful years together. George was employed by CF&I Steel Corporation for 41 years. There he worked as area supervisor in the rail mill-rod mill quality control. He retired in 1977 and then enjoyed traveling and working with stained glass. Mr. Boedecker was a lifetime member of the Elks Club and he attended the Divine Science Church where he enjoyed working on many projects. His family will remember him as a devoted husband, loving father, a fun-loving, game playing grandpa, and a kind and faithful friend. George is survived by his beloved wife, Ethel; his son and daughter-in-law, Wayne and Helen Boedecker of Anchorage, Alaska. He will be sadly missed by his grandchildren, Brad Boedecker of Anchorage, Alaska and Janet Boedecker of Bend, Oregon. Also surviving are his sister and brother-in-law, Marge and Roy Browder of Montgomery, Alabama; sister-in-law, Ruth Wilks of Brackettville, Texas; brother-in-law and sister-in-law, Ralph and Oleta Yoder of Karval, Colorado; and numerous nieces and nephews. As per his request, his body was donated to Colorado State Anatomical Board. The Memorial Service will be held 2:00 p.m. Friday, August 31, 2001, at the Divine Science Church, with Reverend Earleen Cornell officiating. Memorial donations may be made to Sangre de Cristo Hospice, 704 Elmhurst, Pueblo, 81004, or the Divine Science Church, 115 E. Routt Ave., Pueblo, 81004.