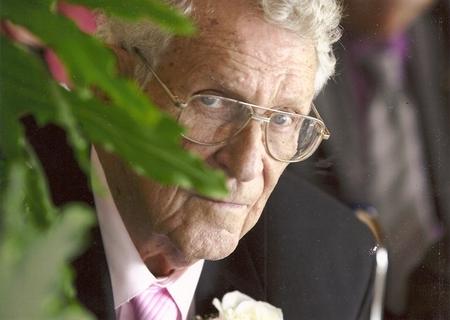 Garth Tanner Haigh, 91, passed away April 5, 2009. Survived by his daughter, June Haigh (Dale) King; grandson Elliott Haigh (Emily) King; and numerous cousins. Preceded in death by his wife, Mary Alice Haigh; father, Joseph Glenn Haigh; mother, Jessie Tanner Haigh; and sister, Jo Alice Haigh. The family would like to extend a special thanks to his friend and care giver, Jo. Garth was born Oct. 11, 1917, in Canon City, Colo. He graduated from the University of Denver School of Commerce in 1940. In younger years, he enjoyed model airplanes; he was a trained aeronautical engineer from Curtis Wright Tech, California, and later worked as an engineer in the B-29 Modification plant in St. Louis, Mo., during WWII. In 1978, after 25 years of service, Garth retired as a Senior Highway Engineer from Colorado Department of Highways (now CDOT) He enjoyed working on his computer, crossword puzzles, and helping his family with taxes and investments. He particularly liked to travel Colorado highways and point out roadways and intersections that he had designed while working for CDOT. He was a 68 year member of Mt. Moriah Lodge #15, AF & AM, in Canon City, and a member of the Knights Templar and the Consistory. Masonic Rites by Mt. Moriah Lodge #15, AF & AM and a private graveside service will be held at Mountain View Cemetery. The family respectfully requests the omission of food and flowers. Memorials may be made to the Pueblo Symphony through Montgomery & Steward Funeral Directors, 1317 N. Main St., Pueblo, Colo. 81003. Online condolences, www.montgomerysteward.com