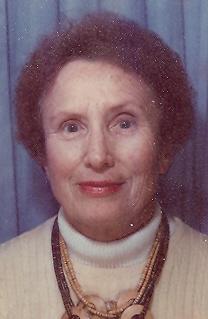 Friederike Hermine Love of Pueblo, passed away Saturday, March 8, 2008, at Parkview Hospital. Born September 19, 1925, she was one of three daughters of Friederich and Anna Simmetzberger of Linz, Austria. There will be a memorial service at 2 p.m. on Friday, March 14, 2008, at the Montgomery and Steward Chapel, 1317 N. Main St., in Pueblo. Friederike attended high school at Austria's Elite School, a state run boarding-school and teachers' training college. She taught elementary and middle school in Upper Austria for over ten years before she met Alan Love in Vienna while he was studying for his doctorate. On a subsequent visit to Austria, he asked her to marry him. She moved to Pueblo, Colorado, in 1971 and they were married in Santa Fe in March of 1972. Following his passing in 1991, Friederike moving into Presbyterian Towers and has also worked as a volunteer at Parkview Medical Center pharmacy for over ten years. Preceded in death by her husband, Dr. Alan Love. Survived by sisters, Anni Ristau of Austria and Elisabeth Pfau of Germany; stepsons, Michael Love, Austria and David Love, Alaska; nephews, Georg Pfau and Wilfried Ristau; and nieces, Liselotte Fass and Karin Bayer. Donations in Friederike's name may be made to: The Alan P. Love Memorial Scholarship Fund or the Pueblo Symphony, via Montgomery and Steward Funeral Directors, 1317 N. Main St., Pueblo, Colo. 81003. Online condolences, www.montgomerysteward.com *****