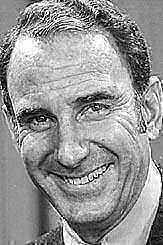 Congressman Frank Edward Evans, born September 6, 1923, to Frank Edward Evans Sr. and Mildred Hoag Evans, died June 8, 2010. He was 86 years old. He was preceded in death by his parents and his sister, Louise Evans Farr; and his cousins, Colonel John W. Rawlings, Jr. and Dorothy Rawlings Nelson. He is survived by his loving wife of 58 years, Eleanor Trefz Evans; his children, Peter (Ginger) Evans, and their children, Lee, Anna and Julie; daughter, Frances Evans-Maytum (Ken Maytum), and her children, Holland, Ellie and Hannah; son, Charles (Paula) Evans, and daughter, Susan Evans and her children, Taccara, Talon and Lindsey Whitney. Also survived by his cousin, Bob Rawlings (Sandy); sister-in-law, Ernamarie (Henry) Williams, and brother-in-law, Nick Farr. Frank attended Fountain Valley School near Colorado Springs from 1938 to 1941. He attended Pomona College in Claremont, California from 1941 to 1943. He spent only two years at Pomona when his education was interrupted by World War II. He joined the Navy, earned his wings in the Navy Air Force, and flew PBY Catalina seaplanes in the Pacific Theater. After the war, he matriculated at Denver University, graduated with a Bachelor's Degree and then a law degree in 1950. Because he was interested in labor law, after graduating from law school he worked for Gates Rubber Company in the summer of 1950 to better understand life in a factory. He came to Pueblo later that year and became associated with the Pueblo Law Firm Petersen and Evensen. During that time he met the love of his life, Eleanor Trefz, youngest daughter of prominent Pueblo banker Richard Trefz and Erna Trefz. They were married April 5, 1952. Frank was elected to the Colorado State Legislature in 1960 and served two terms until 1964. In his first term he was named 'Outstanding Freshman Representative' by the Colorado Press Association. Frank was elected to The United States Congress in 1964 and served in the Congress for the next fourteen years, representing the Third Congressional District of Colorado. When Frank first announced in 1964 that he was going to oppose long term 3rd District Congressman J. Edgar Chenoweth, he hesitatingly told his grandfather, Frank S. Hoag Sr. of his plans. Mr. Hoag was Publisher of the Pueblo Star Journal and Chieftain, an ardent Republican who had endorsed Cong. Chenoweth in each of the Congressman's eleven successful elections. Grandfather Hoag responded to Frank: 'I respect your decision, son, but I'm not- a- gonna endorse you.' And, though he didn't endorse Frank for Congress until his 7th and final term, he always had great love and respect for him, as he explained to Frank with a noticeable smile, 'even though you're a Democrat!' Frank Evans voluntarily retired from the Congress in 1978, having never lost an election. While he took an active part on many issues in the Congress, the fact that it was not important to him to have his name attached to the bills he supported was unusual. His natural modesty made him easy to work with. He served on the Armed Forces subcommittee and the Appropriations Committee. He earned numerous accolades during the seven uninterrupted terms he served the people of his district and his country. Frank and Eleanor retired to Santa Fe in 1988 to enjoy the next 20 years of their lifelong love affair. Frank built model ships with great detail and high quality, bird houses depicting the old mission churches, and beautiful beaded belts. He was an avid historian, an expert on the Civil War and Abraham Lincoln. Frank taught his children to respect the dignity of all men and women, to stand up for what's right and to treat all people with respect. He was the kindest, and most gentle of men. He had a delightful sense of humor. One couldn't help but feel good around him. Frank stated early on 'What I want to do is take a healthy bite out of life.' And he did. There will be no viewing. Service, 10 a.m. Saturday, June 12, 2010, at Ascension Episcopal Church, 18th St. and Grand Ave., with the Reverend Father Andrew McMullen officiating. Private interment will be held. Please omit flowers, as they are not allowed in the church. In lieu of flowers and food, memorials may be made to CSU-Pueblo Scholarship Fund through Montgomery & Steward Funeral Directors, 1317 N. Main St., Pueblo, CO 81003. Online condolences, www.montgomerysteward.com