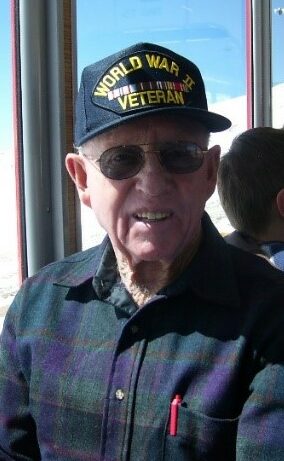 Frank Alexander Ferguson, 94, was born in Holdenville, Okla. to Ben and Barbara Ferguson on February 28,1927.  Frank lived in Oklahoma for his childhood and adolescent life. He joined the army and served in Germany during World War II.  Upon returning to the States, he moved with his family to the central coast of California.  Later he met his future wife, Esther, through her sister’s introduction in Cayucos, Calif.  He was married to Esther for 66 years and the Lord blessed them with two daughters.   The family enjoyed a good life as both Esther and Frank worked at the Delano School District in Delano, Calif.  He retired in 1987.  They were faithful members of Immanuel Baptist Church in Delano, Calif. for over 30 years.

In 2006 he and Esther moved to Pueblo to be close to family.  He loved his Lord, Parkhill Baptist Church and his family.  “Blessed in the eyes of the Lord are the death of His saints.”  Frank was preceded in death by his parents, Ben and Barbara Ferguson; brothers, Clarvel Greer, JB Ferguson, John Robert (Dugie) Ferguson, Charles Ferguson, sister, Geraldine Cassel and his wife Esther Ferguson.  Survived by sisters, Beverly Streater and Patricia Henwood (Joe); daughters, Nancy (Douglas) Cox and Linda (Dave) Blackburn; four grandchildren; and nine great-grandchildren.

His siblings called him Frankie or Red. Most of the Bruce McCandless staff called him Frankie or Cowboy. He was “Popeye” when he worked at the DelVac Ice Plant. He was Mr. Ferguson to the kids on his bus route (school and church). He was grandpa and great grandpa to our kids. He was known for his cowboy hats, boots, belts and NFR buckles – he was loved by many.  He always stopped to talk to anyone he met. Best dad and grandpa in the whole world!