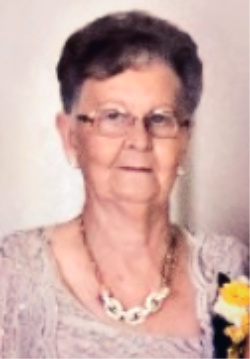 Etta Mae (Martin) Provost, 84, went to her final resting place Easter morning April 12, 2020. Born Nov. 30, 1935, she was a lifetime resident of Pueblo, Colo. Preceded in death by parents, Erwin and Lila Martin; stepmom, Pauline Martin; and mother and father- in- law, Joe and Mary Provost. She is survived by her husband of 66 years, James Provost; sister, Cindy (Marty) Levar; children, Pam (Chris) Snow, Sandy (Brant) Garrett, Jim (Shelly) Provost, Tammy (Scott) Stroud and Tracey (Ken) Stowers; ten grandchildren; seven great-grandchildren; and one arriving in June; as well as numerous nieces, nephews and friends. She attended Lakeside Vineland, was involved in 4-H and worked at Wilcoxson and the Pueblo Army Depot. Her biggest and most important job was being a Loving wife, mother, grandmother, great grandmother and a powerful homemaker. She was a member of Vineland United Methodist Church and was always involved with church and community events. Her heart was that of GOLD and always put others before herself. She will be greatly missed by her family and friends- a hard fought fight mom! A big thank you to Sangre de Cristo Hospice for the over and above care that was given to her and her family. Viewing, 5 to 8 pm Thursday, in the Montgomery & Steward Chapel. In lieu of flowers and food, you may donate to Vineland United Methodist Church Memorial Fund, 1587 36th Ln, Pueblo, CO 81006. Celebration of Life will be held at a later date. Online condolences, www.montgomerysteward.com