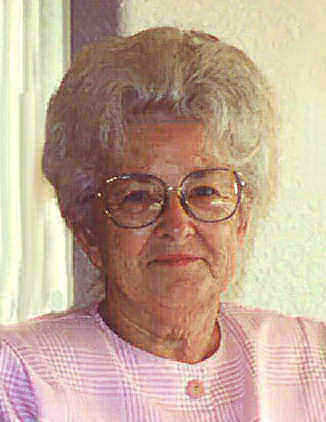 Esther Wright, 85, passed away peacefully Feb. 21, 2012. Esther was born in the middle of five siblings to Erich and Ephine Krieger on Dec. 17, 1926, in Saskatchewan, Canada. Esther met the love of her life in Denver while on a working vacation from her hometown of Waterloo, Iowa. Esther was the devoted wife to Lester, who preceded her in death in 2007. She was a dedicated mother to six children and the doting grandmother to 16 grandchildren. Esther was a full-time housewife and mother on the family's ranch northeast of Boone. Besides being the chief cook, bottle washer and the farm's accountant, she also was the taxicab driver, as you can imagine all the events that six kids go to. She was the head cheerleader to her husband and kids, as she never missed a game, recital or event. Esther gave her life to Christ as a young woman. She lived her faith in Christ in everything she did and she passed on that love to her husband, children and all the friends and neighbors who she ran across. She was slow to anger but defended her family with the ferocity of a lioness defending her cubs. She truly was a Proverbs 31 woman of faith. She never let the disability of being deaf affect the lives of anyone around her. Most never knew of her disability. Esther's surviving brother, Eugene (Florence) Krieger, lives in Dunn, N.C. She is survived by her children, Kathy (Jim) Hartsuiker, Colorado Springs, Lori (Mike) Bobinsky, Portland, Maine, Craig Wright, Hammondsport, N.Y., Jeanne (David) Clawson, Englewood, Kan., Lisa (Dean) Kolp, Midland, Texas, Lance (Kristin) Wright, Pueblo. Visitation, will be from 5 to 7 p.m., Friday, Feb. 24, 2012. Funeral will be held at 1 p.m., Saturday, Feb. 25, 2012. Both will be held at Montgomery & Steward Funeral Home, 1317 N. Main St., Pueblo, CO.