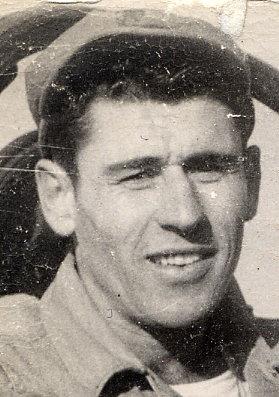 Edward Herbert Grasmick peacefully crossed to his eternal resting place on December 6, 2006, at home with his loving wife of 31 years and family. Eddie was born in Sugar City, Colo., July 14, 1928, to the union of the late Peter Grasmick and Marie Termer. Both families migrated to Colorado after following Catherine the Great to Russia from Germany. Upon graduation from Sugar City High School, he served as a Marine in the Korean War where his love of children surrounded him with in need families. His large heart had him write the Ordway newspaper asking for donations for these children. He went to work as a switchman on the C&W Railroad at the CF&I Steel Mill and became assistant yard master until his retirement in 2000 from the Rocky Mountain Steel Mills after 45 years of service. He raced motorcycles for 20 years enjoying the thrill of speed and if he lost the race he got a new bike for the next race! Preceded in death by his father and mother; the only father he knew, AJ Smith; and brother, William Joe Smith. He leaves to cherish his memory his loving wife, Mary; brother, Leo (Shirley) Smith, Midland, Texas; sister, Elizabeth (Fred) Wheeler, Franktown, Colo.; his loving family, Ray, Robin and Larry Sinclair, Kimberly (Glenn) Hinson, Camden, SC, Christine, Philip and Nicholas Sinclair, Pueblo, Colo., Brandi Ray and Taylor Watts, Camden, SC, Lee Arthur and Dean Louis Cage, Pueblo West. The reasons for his smiles, Shanon M. (Erin) Sinclair-Grasmick, Tabitha L. Sinclair-Grasmick, Tyler Jacob and Michael Anthony Sinclair; his beloved nieces, nephews and cousins. Eddie was confirmed at the Lutheran church in Sugar City and was a member of First Southern Baptist Church in Pueblo. Eddie lovingly donated his body to Science Care with the hope of one day finding a cure for Alzheimer's, Parkinson's Disease and Gilliam Barre Syndrome. Summer of 2007, his cremated remains will be taken to the high mountains that he so loved. A celebration of his life and the love he so unconditionally gave will be celebrated from 1 to 5 p.m. Sunday, December 10, 2006, at his home, 1341 Cody Avenue. The Eddie Grasmick Memorial Scholarship Fund is in honor of his great love for all children. A very special 'Thank You!', Dr. L. Jensen, Virginia, Shelly and Staff, Dr. Jan Davis and Dr. James Smith, for the loving care and guidance, Gerry Montgomery of Montgomery & Steward Funeral Directors for his kindness and caring. Online condolences, www.montgomerysteward.com