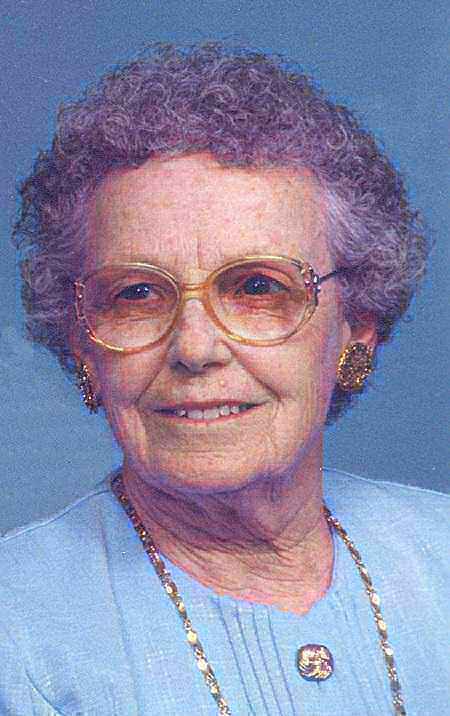 EDNA MAE GOODWIN, born to Joe and Anna Cross in Pueblo, CO, Feb. 3, 1918, and passed away April 14, 2011. She is survived by her husband of 71 years, Dick Goodwin; children, Gary (Elaine) Goodwin of Alamosa and Joann (Randy) Smith of Pueblo; Grandchildren, Karron (Chad) Heaton of Colorado Springs, Gaylene Horning of Alamosa, Greg (Jeni Jack) Goodwin of Alamosa and Andy (Kristi) Smith of Windsor; Great-grandchildren, Zachary and Garrett Horning, Juliana and Allegra Smith and Brooke Heaton; sister, Eileen Matott; nephews, Rusty Ross, Tom and David Matott. She was preceded in death by her parents; brother, Clyde; and sister, Alice. Edna Mae was a long-time member of Parkhill Baptist Church and a past volunteer at St. Mary-Corwin Hospital. She was the bookkeeper at Pueblo Auto Parts for many years. Her faith in Jesus Christ was the foundation of her life while teaching and playing the piano gave her such joy. Viewing at 10:00 a.m., Monday, April 18th with funeral services following at 11:00 a.m. at Montgomery & Steward Funeral Home. Interment at Imperial Memorial Gardens. In lieu of flowers, donations may be made to the Horizon Heights Alzheimer's Nursing, 1610 Scranton, Pueblo, 81004.