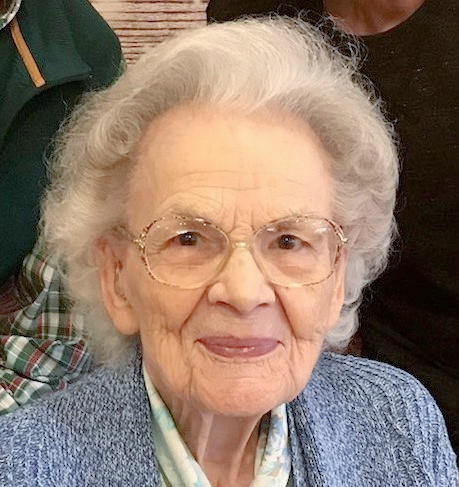 Edith Marie Prater, 96, passed away peacefully on February 19, 2021 in Fort Collins, Colorado.  She was born the oldest of four children on December 31,1924 to W.E. Holley and Mary Blees Holley in Fenter, Arkansas.
After graduating from Malvern High School, Edith spent a year working for the Department of the Navy in Washington D.C.  She then attended and graduated from the University of Arkansas with a bachelor of science degree in business administration.  She met her husband to be, the late Joe Prater, at the university and the two were married in 1947, sharing life for 57 years before he predeceased her in 2004.
Relocating to Colorado, Edith taught English and Business at Lamar High School for several years before starting a family which ultimately included four children.  She and Joe moved to Pueblo in 1956 when he became an associate professor of math and the head football coach at Pueblo Junior College.  She embraced the not always easy role of being a coach’s wife and made many lasting friends within the academic and sports community as the college grew from a junior college, to a state college and finally a state university.  Edith and Joe were also active members and supporters of Calvary Baptist Church for many years.
Edith was very involved in neighborhood life and was a Brownie and Girl Scout leader for six years before turning much of her energy towards the 4-H Club.  She was an enthusiastic 4-H leader for seventeen years – first starting her own club, then being involved at the county and state levels.  She was a member of the Pueblo County and Colorado State 4-H Foundations, president of the Pueblo County Leaders Council in 1979-1980, and was for many years a superintendent of the Pueblo County Fair.  Edith received the State 4-H Leader Recognition Award in 1978 and was inducted, along with her husband, into the Pueblo County 4-H Hall of Fame in 1997.
She was an avid bridge player, family historian, and a very active and loving grandmother to Abby and Adam Williamson.
She is survived by children Beverly (Scott) Williamson of Olathe, Kansas, Sharon Prater of Toronto, Canada, Pam Prater (married to Jay Surdell) of Woodland, California, and James Prater (married to Vicki Volbrecht) of Fort Collins.  Also survived by her grandchildren, Abby and Adam Williamson of Olathe, Kansas.
Celebration of life, 10:30 a.m. Wednesday, Oct. 20, 2021, at Westminster Presbyterian Church, 10 University Circle.