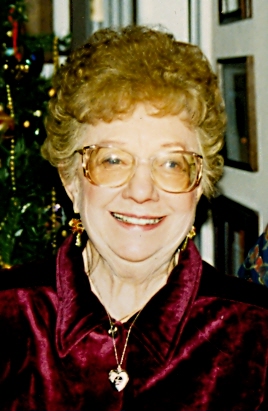 Edith M. Holiman, 89, passed away peacefully on November 10, 2012, 11 days after her husband of 62 years, John Holiman. Born on October 31, 1923, to John Riva and Mary Vercelli Riva. Edie was preceded in death by her parents and sister, Augustine Mariani. Edie graduated from Central High School and served in the WAVES during World War II. She worked at Montgomery Ward for many years, and married John Holiman on June 13, 1950. As a devoted wife and mother, Edie was always there to support her husband and guide her two daughters, Karen and Linda. She was a careful and frugal manager of the household finances and was very creative. Most of her daughters' school clothes were sewn by hand, and the best Christmas present ever was an amazing wardrobe for Karen and Linda's Barbie dolls. Music was Edie's passion. Beginning with the choir at St. Francis, Edie sang most of her life. A dedicated member of the Pueblo Symphony Chorale, Edie rarely missed a performance in over 40 years. She cherished the friendships she made and relished in their tours to Europe and performances at New York's Carnegie Hall. Edie was also very involved with the Pueblo Symphony Guild, serving as president, and for many years, as secretary. Along with her husband John, Edie volunteered with Meals on Wheels for many years and was a member of Keep Pueblo Beautiful. She also loved and supported the Pueblo Greenway and Nature Center. Following John's retirement, they were free to travel the world. Many trips with family and friends took them from Europe to New Zealand, with many stops in between. They managed to touch every continent but Africa. Edie is survived by her loving daughters, Karen Holiman of Colorado Springs and Linda Brading of Littleton; her grandchildren, Sean Brading and Kelsey Brading. Many nieces, nephews and cousins also mourn her loss. Edie's memory will be cherished. Her bright smile will be fondly remembered. Memorial Mass to celebrate Edie's life will be held at 1 p.m. Friday, Jan. 11, 2013, Shrine of St. Therese. Memorial contributions may be made to The Nature and Raptor Center of Pueblo, P.O. Box 8295, Pueblo, CO. 81008. The funds will go towards a bench dedicated to our parents at the Nature Center.Online condolences, www.montgomerysteward.com