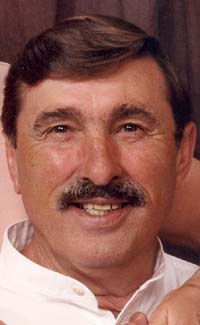 Donald L. Podschweit, 69, crossed the 'finish line' May 24, 2008at 4:30 a.m.after a relentless battle with lung cancer. He is survived by his wife and best friend of 50 years, Arleen Podschweit, son, Donald L. (Teri) PodschweitJr. Of Somonauk, Ill., grandchildren, Kristeen, Danielle, Dan and Tim, great-grandchildren, Kennedy, Maggie, Taylor, Timmy and Tiana, brother-in-law, Jack (Phyllis) Bayuk of Pueblo, several nieces and nephews, and special friends, Ted and Cathy Ortega, Mari Ann Roe, and Jerry and Lorine Denton. Preceded in death by his parents, Harold and Shirley Podschweit, parents-in-law, Frank and Jean Bayuk, and brother-in-law, Robert Bayuk. Don was born Nov. 21, 1938 in Aurora, Ill. He served his country in the U.S. Army. Don and Arleen were married July 13, 1957 in Pueblo, CO. Soon after they married they moved to Illinois, but returned to Colorado because of Don's love of the mountains. His passions were his family, his beloved pets, Smokey and Podgey, NASCAR and the Chicago Bears. He was a member of Ironworkers Local #393 of Aurora, Illinois. There will be no viewing. Cremation has taken place. A private service will be held at a later date. Special thanks to Dr. Frank Settipani and his staff at Rocky Mountain Cancer Center and Sangre de Cristo Hospice. Those who desire may make memorials to Sangre de Cristo Hospice through the funeral home. Online condolences MontgomerySteward.Com.