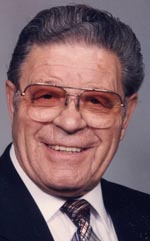 Dominick R. Fratterelli, lifetime Pueblo resident, passed away December 28, 2003. Mr. Fratterelli was born in Pueblo, Colorado on May 16, 1920, and graduated from Centennial High School's Class of 1938. He was a Certified Dental Technician and former owner and manager of Atlas Dental Lab. He was a Master Sergeant in the U.S. Air Force, a veteran of World War II, and retired in 1980 from the Air Force Reserves. He was also a lifelong member of Pueblo Elks Lodge #90, American Legion Pueblo Post No. 2, Air Force Sergeants Association, and lifelong and Charter Member of Knights of Columbus Council No. 4286. Member of Cathedral of the Sacred Heart where he served as Lector, Eucharistic Minister, former member of the Parish Council, Finance Committee, CHD Committee (14 years), and Co-Chairman of the Sunday Coffee Program (25 years). On the occasion of the 50th Anniversary of the Catholic Diocese of Pueblo, Bishop Arthur N. Tafoya bestowed the Jubilee Award to Dom and his wife, Christine, for their involvement in service for the church. Survivors include his wife, Christine, of 60 years; brothers, Joseph (Sylvia) Fraterelli, Eno J. Fraterelli and Louis A. Fraterelli; sister, Lucille Bacino; and many nieces and nephews. Preceded in death by his mother, Mary J. Fratterelli; brother, Adolph Fraterelli; and sisters, Sylvia Desiato and Flora Stephens. Visitation will be Tuesday, December 30, 2003, from 10:00 a.m. until 5:00 p.m. at the funeral home with family greeting friends from 3:00 to 5:00 p.m. Funeral Mass will be held at 9:30 a.m., Wednesday, December 31, 2003, at the Cathedral of the Sacred Heart, 11th and Grand with The Most Reverend Arthur N. Tafoya, D.D. as celebrant, assisted by Deacon Jake Shafer. Military honors and interment will follow at Roselawn Cemetery. The family respectfully requests the omission of food. Memorials may be made to Cathedral of the Sacred Heart Building Fund through the funeral home.