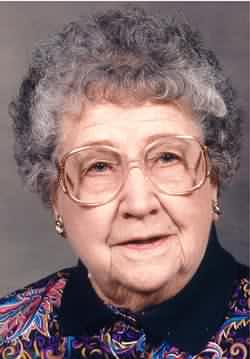 Cornelia C. Brummer, 92, passed away November 9, 2000, in Pueblo, Colorado and was born on August 4, 1908, in Larkspur, Colorado to parents, Nettie May (née Kibbey) and Campbell D. Moorefield. They preceded her in death as did her husband, Michael A. Brummer; three sisters; and three brothers. She was a housewife until later years when she worked at the Pueblo Army Depot until she retired in 1961. They lived in Cañon City until moving to Pueblo in 1957. Surviving her are three daughters, Dorothy (Dave) Bauchat, Ann Arbor, Michigan, Donna (Fred) Ivey, Broomfield, Colorado and Alice (Glen) Allen, Pueblo, Colorado; and one son, Michael Brummer, Pueblo. Also 15 grandchildren and 20 great-grandchildren; and one sister, Cleo Chiappetta, El Paso, Texas. At her request, there will be no viewing. Graveside service will be held 1:00 p.m. Monday, November 13, 2000, at Lakeside Cemetery, in Cañon City, with Reverend Pat Hurley officiating.