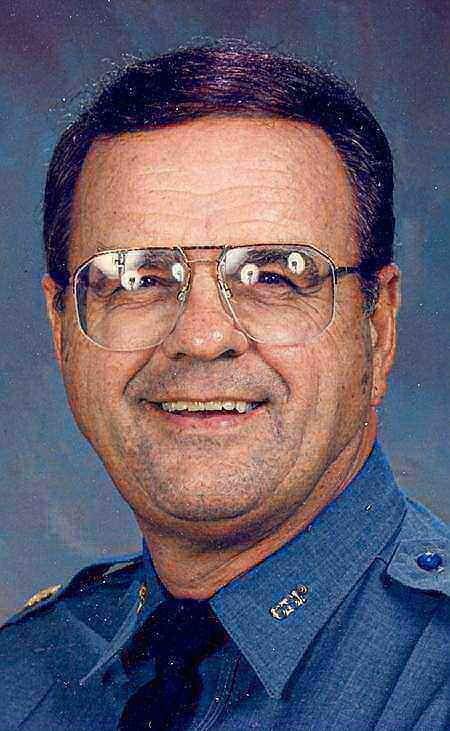 Lt. Colonel Charles H. 'Chuck' Pullin, CSP (Ret.) died at his home in Pueblo, Colorado, December 23, 2008. Chuck Pullin was born to James 'Jim' and Cora (Bruce) Pullin, December 2, 1936, in Bristow, Oklahoma. His family moved to Cheraw, Colorado in the early 1940's where his father had purchased property to ranch. Chuck was a wonderful story teller and would entertain his extended family for years with his tales of growing up in Cheraw; driving the school bus so that he and his friends could 'borrow' watermelons from the local fields; leaping from trees onto his horse for a 'quick getaway' and many others. Chuck graduated from Cheraw High School in 1955 and married Barbara 'Bobbie' (Bailey) Pullin. They moved to La Junta, Colorado where Chuck worked as a manager at the Safeway grocery store. They had three children, Jackie (Ricketts), James 'Jim' Pullin and Janette (Karges). In 1958, Chuck joined the La Junta Police Reserve and was shortly promoted to Chief. He would often say that he started out his career as Chief and it had been downhill ever since. In 1961 he joined the Colorado State Patrol starting a career that would become his passion and his legacy. He was transferred to Walsenburg, Colorado where he would spend the next 16 years of his life and where his children would graduate from high school. When the Walsenburg golf course was built in 1969, Chuck discovered another passion and during the next 39 years would spend many happy hours with friends and family on the course. In 1977, Chuck married Jan (Carlo) of Pueblo and transferred to Bayfield, Colorado. The next few years would see several promotions and job transfers within CSP. Chuck was promoted to Sergeant and transferred to Pueblo in 1980, promoted to Lieutenant and transferred to Colorado Springs in 1983, promoted to Captain in 1992, promoted to Major and transferred to Grand Junction in 1993 and promoted to Lieutenant Colonel and transferred to Denver in 1995. While serving in the CSP Chuck had hundreds of career highlights. He met and coordinated security details for two U.S. Presidents, graduated from the FBI National Academy in Quantico, Virginia, served as president of the Colorado Police Protective Association, established the Smokey Golf Tournament (which last year held it's 38th annual), served as the president of the Air Force Academy Quarterback Club and received hundreds of commendation letters, appreciation plaques and citations. In 1998 after 38 years in the CSP, Chuck retired and moved back to Pueblo. His retirement wouldn't last long however as he was hired by the Colorado Parole Board as a hearing officer, did charity work as a member of the Fraternal Order of Eagles and working as a ranger at Walking Stick golf course. Chuck's retirement was filled with travel and good friends. He attended the 2006 Masters, the 2007 and 2008 U.S. Opens (yes, he really was in the stands at the 7th green when Tiger Woods won, as he had no doubt told you); trips to Europe, the Philippines, Seattle and San Diego to visit family; and many others. Chuck's life was more than just a listing of accomplishments. It might best be described through a memory of his daughter Janette. Janette came home from school one day to surprise a young man who had broken into the house. Before she could react, Chuck arrived home. Janette was so relieved, thinking 'how lucky I am that Dad is here.' Chuck walked the young man out of the back door and Janette followed to see what would take place. Surprised, Janette watched as Chuck withdrew his wallet and handed the young man some money. She overheard him say 'Son, you don't have to break into my house to get money. If you need help, you just come and see me.' He is survived by his children, Jackie (Tim) Ricketts of Fort Collins, Colorado, Jim (Marilyn) Pullin of Fort Collins, Colorado and Janette (Steve) Karges of Escondido, California; his sister, Sue Watters (Al) Provost of Denver; his grandchildren, Stephanie and Kevin Karges, Mackenzie and Devin Ricketts and Savannah Pullin; and his former wives, Barbara 'Bobbie' Pullin of Fort Collins, Colorado and Jan Pullin of Pueblo, Colorado. Chuck was surrounded by good friends and a family who loved him dearly. His was a life well lived. Memorial Mass, 10 a.m. Saturday, January 3, 2009, at St. Joseph Church, 1145 Aspen Rd. In lieu of flowers, memorials to Colorado State Patrol Family Foundation, Eagles Christmas for Kids or Pueblo Animal Welfare, in care of Montgomery & Steward Funeral Directors, 1317 N. Main St., Pueblo, Colo. 81003. Online condolences, MontgomerySteward.com