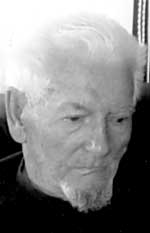 Charles C. Chappell, 98, of Pueblo West, Colo., went to be with the Lord on Sunday, Jan. 18, 2009. He was born June 17, 1910, in Gordon, Neb., to Lloyd Percival and Mary Westlake Chappell. Survived by his daughters, Elizabeth Chappell-Moffett of Pueblo West, Colo., Claire Martin of Fort Collins, Colo., and Nancy Tobin of Loveland, Colo.; three grandchildren, Megan Moffett, Lincoln, Neb., Sarah Martin, Eugene, Ore., and Nickolas Tobin and wife, Jennifer, Aurora, Colo.; one great-grandson, Joshua Charles Tobin, Aurora; and one sister, Jessie Tulloss, age 96, of Chadron, Neb. He was preceded in death by his parents; his loving wife of nearly 60 years, Mary Nanne Lambirth, who died in 2004; and four younger half-brothers. Charles graduated with his B.A. from Nebraska Wesleyan University, M.A. from Colorado College and doctoral work in theology from Northwestern University in Chicago. He was a member of the U.S. Air Corps, World War II and served as chaplain/medic. Charles was a Methodist minister during the first part of his life. He and Mary bought the Montrose Motel and Gift Shop in the Big Thompson Canyon below Estes Park, Colo., in 1954, and lived there for 50 years. There was a private memorial service at Mountain View Cemetery, Jan. 24, 2009. 'The best and most beautiful things in life cannot be seen or even touched...they must be felt with the heart.' Helen Keller