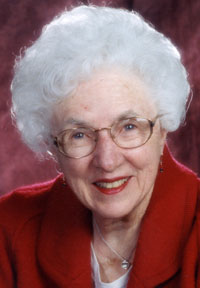 Catherine L. 'Cay' Hopkins, 79, passed away April 19, 2004, in Pueblo, Colorado. Catherine was a wife, mother and the last of the great American volunteers. Cay was born February 10, 1925, in Denver, Colorado to the late Harry and Carrie Howland. At an early age she learned the joy of giving of oneself and the responsibilities of being a leader. In December of 1946, Cay was joined for life with her life partner, William G. Hopkins. Catherine truly enjoyed her role as a wife and strived for 58 years to be a partner who supported and completed the circle of love that binds two people into a couple. In 1951, Cay began a second, and in the opinion of her children, greater role as mother. Cay's mothering nature not only included her three children, but a wide age range of children who knew her as 'Grandma Cay.' Cay and William served as missionaries in Central America. No job was too small for Cay. She was always available with a smile and a hug when needed. Cay was a true believer in Pueblo. Her contributions to such organizations as the YMCA, Pueblo Symphony, Rosemount Museum, and the Sangre de Cristo Arts Center, illustrates her love of her city and her conviction that a life should be exposed to and enhanced spiritually, culturally and physically. Cay was a member of the First United Methodist Church, where she gave generously of her time and talents. It was her belief that all matters could be solved by having a personal relationship with God. Cay is survived by her husband, William G. Hopkins; daughters, Gayle (Steve Lamy) Hopkins, Los Angeles, Calif., Sharon White, Chester, South Carolina; son, Greg (Cindy) Hopkins, Denver; three grandchildren, Rachel White, Connor and Brenna Hopkins and two grand dogs. Memorial service will be held at 10:00 a.m., Saturday, April 24, 2004, at First United Methodist Church, 11th & Court., with the Reverend Dr. Rick Calhoun officiating. In lieu of flowers, the family is requesting that families come together for a night of togetherness and conversation. Memorials may be made to the YMCA or the First United Methodist Church, c/o the funeral home. Online condolences, www.montgomerysteward.com